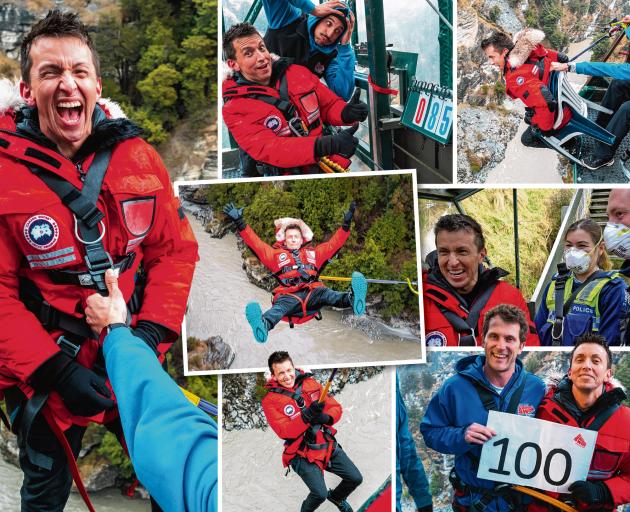 Jason Medina also set a world record - to be ratified by Guinness World Records - after doing 100 jumps at Shotover Canyon Swing on Thursday.

The 46-year-old, who has so far raised about $7000 from business and individual donors, online auctions and a Givealittle page, said the cause was personal to him after he tried to take his own life in May last year.

Among those to do tandem jumps with him were Queenstown police constables Matthew Hargreaves and Alex Cully, who broke into his garage to save him.

Starting at 8am on a cold and drizzly day, with breaks while others jumped, he completed the century just after 6pm.

The last 20 or so were mentally taxing, but the fitness training he was doing as part of his recovery meant he had coped well physically.

"The tandems were hardest - when someone jumps with me it increases the G-force - so the only time I felt slightly unwell was when I did five tandems in a row."

He woke up yesterday feeling like he had "done something adventurous", with a headache and a tight back.

He took a day off work and skipped his usual gym workout to rest and have a massage.

He said there was no official world record for the number of times a person has jumped off a cliff, so Shotover Canyon Swing was preparing an application to Guinness World Records.

• Donations can be made through a Givealittle page and on the Shotover Canyon Swing website.