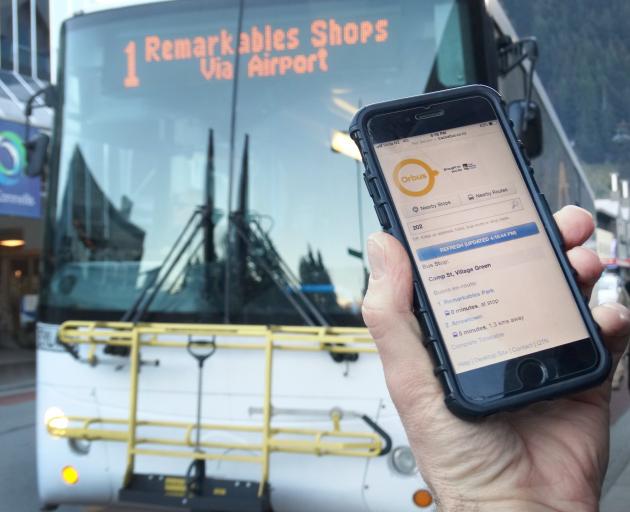 Orbus users in Queenstown can now live track their buses after the Otago Regional Council partnered with the TrackABus service. Photo: Tracey Roxburgh
Queenstown public transport users can now live-track their buses after a previous trial in the resort came to a quiet end and left confused commuters waiting in the cold.
The Otago Regional Council has partnered with TrackABus to provide accurate live-tracking information for Queenstown bus users.

Available on desktop and mobile, tracking shows the location of buses through live GPS information on each route, along with the time and distance away from upcoming stops.
Users could also text for up-to-date information on a particular stop on their bus route.

Council transport team leader Julian Phillips said it would be a "quick and convenient way'' for users to get information without having to access the website.

The system went live earlier this week on a "trial basis'' however, there is "no planned cut-off date''.

"We're still working out the kinks, but there's great potential here for a feature that bus users are really keen to have.

"We'll be asking people what they think of the real-time tracking and how it could be improved through Orbus QT Facebook in a couple of weeks.''

A previous tracking service, Choice App, was launched with great fanfare in August 2017 at the Hilton by then-Transport Minister Simon Bridges, attended by senior managers from the regional and district councils and the NZ Transport Agency.

Billed as a "world-first'' and developed at a cost of $770,000, the multi-lingual app - which was eventually updated to include Te Reo maori, aimed to connect users with transport options, including the $2 Orbus network, focusing on winter activities and moving visitors from Queenstown Airport to the town centre and ski areas.

It also included a "tracking'' service to show where buses were on the network, however, it worked only intermittently and users had no way of knowing which bus was theirs.

During the past few weeks bus users have started voicing their frustration about lengthy bus delays, particularly on the Arrowtown-Arthurs Point route, and their inability to track them because the Choice app no longer worked.

In some cases passengers are waiting up to 45 minutes for buses to arrive, particularly during peak commuter traffic times.

That has been exacerbated by the recent school holidays and ski area traffic.

In a statement, NZ Transport Agency said the Choice pilot was designed to understand if there was "an appetite'' for the app.

It determined there was, so further work is being done with the regional council to redevelop the app.

"A release date will be available later in the year.''

The agency was asked when the pilot ended and if there was a reason users were not informed prior to, or when, that happened.

A response was not received by deadline.

To use the text service, text `QTN' and the number of the bus stop at the bottom of the on-street timetable to 400.  Standard network charges applied.

To live track a bus visit trackabus.co.nz, or orc.govt.nz/orbusqt and select your route.