Michael Hill not over the hill at 80 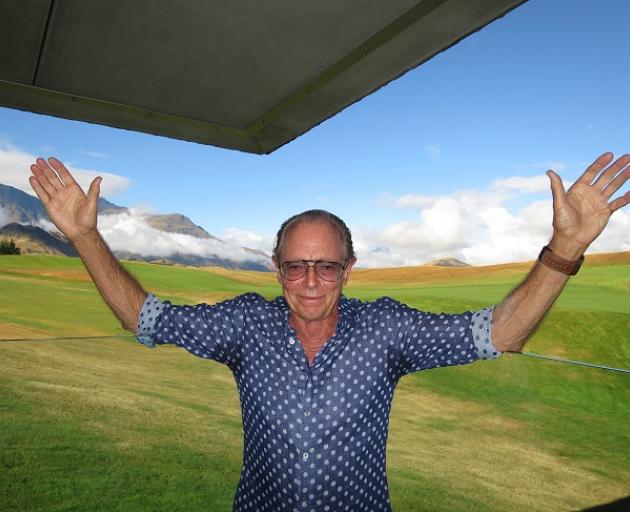 Sir Michael Hill’s a flamboyant New Zealander whose influence has spread far beyond the eponymous jewellery business that originally made his fame and fortune. He spoke with Philip Chandler about what keeps him going as a newly-turned 80-year-old ahead of the 100th Open.

Call him a late developer.

Mega-jeweller Sir Michael Hill only started building his retail empire at 40, after his Whangarei house burnt down and he lost everything.

Now twice that age, and this week co-hosting the 100th NZ Open golf tournament on his Arrowtown spread, he says he wants to keep driving to achieve more goals.

“One of the things, I think, for a successful life is you always need something to aim at.

“I love the thrill of the chase.”

He’s already started ticking off some big goals this year.

Yesterday, in a curtain-raiser to the Open, he hosted past NZ Open champions at a Par-3 event at his new nine-holer, The Farm, which he calls “possibly my finest achievement”.

In a few weeks, he and his wife Christine launch a big boat, ‘The Beast’, which they’re having built in Palmerston North – they formerly had a superyacht, ‘VvS1’.

In May/June, Hill hosts the 10th edition of his Michael Hill International Violin Competition, for budding young maestros, in Queenstown and Auckland.

“It’s quite humbling because that is now rated in the top five of the world.

“To hear them play is a real treat.

“It’s like anything at the top, you get the best golfers, you get whatever it is, they’re always a joy to watch and to listen to.”

Hill’s also putting out a 400-page book of his cartoons in October.

All not bad for someone who turned 80 in December.

“Seriously, I’m feeling as I did when I was 63, I think I feel better, actually.”

Asked the secret, he says he watches what he eats.

“I take lots of supplements and things, I have no deficiency in anything.”

He makes an analogy with his golf course – “it’s tweaked every week, and it’s the same with the human body”.

He used to have bad knees and was told he might need surgery, “but I started swallowing big doses of turmeric, and I think it’s all gone away”.

Hill also keeps fit, going to the gym every second day, kayaking Lake Hayes three times a week and cycling around his course.

Meanwhile, he’s also continuing to develop The Hills as a sculpture park.

“I have another one on order from a Maori sculptor in Northland – it will be something quite significant and quite different.”

Having his son Mark as a talented sculptor helped, but Hill says he was inspired to develop the park by friend Guenther Raedler many years ago.

“He said, because I just had one piece, ‘why don’t you put more sculptures on it? No golf course in the world does this – it will give you an enormous point of difference’.”

Despite so many extracurricular activities – including also an exclusive lodge on his property and shares in an Arrowtown hospitality business – Hill says his international jewellery company, which his daughter Emma now chairs, is still his main interest.

Asked about the tough retail environment, he says “we’re going through major changes”.

“We’ve got a new CEO who’s absolutely brilliant, and I’m very confident that within 18 months or two years we will have a totally different business.

“It will still be jewellery but it’s specialising more in Christine’s designs, Mark’s designs and my designs.”

Hill’s delighted his family all live on the property, and hails the contribution of Christine, whom he’s been married to for 54 years.

“You need an opposite, and she’s an opposite to me – she keeps me anchored.”

Looking ahead, he’s proud his golf course, developed on a former deer farm, is effectively “the biggest park in the area”.

If he hadn’t bought it in the mid-’90s, he’s confident it would now be filled with 10-acre blocks “with all sorts of funny, uncoordinated homes”.

Despite a district plan submission to put up to 150 homes, in discreet clusters, Hill says that’s “really an insurance policy”.

“I’ve got no desire to fill the place with homes.

“I think we need to be custodians for the area and look after it.

“We’re only here for a blip, really.”