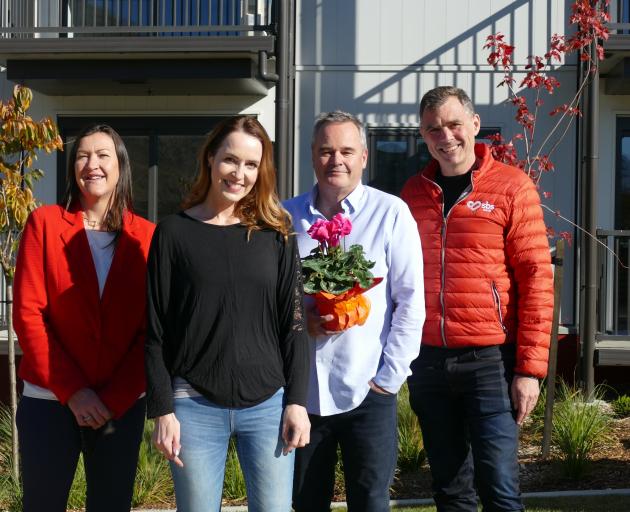 New homeowner Susan Sheridan (second from left) in front of her Toru apartment with (from left) Queenstown Lakes Housing Trust executive officer Julie Scott, SBS member experience general manager Mark McLean, all of Queenstown, and SBS group chief executive Shaun Drylie, of Invercargill. PHOTO: TRACEY ROXBURGH
Fifty households will have moved in to their new homes in Frankton by the end of this weekend, in a scheme which means they are paying not much more than $200,000.

It comes after the Queenstown Lakes Housing Trust settled on the recently completed Toru Apartments.

Secure Home is a New Zealand first, in which people buy the properties through a 100-year lease arrangement and the trust retains ownership of the land in perpetuity.

Moving in to her one-bedroom Secure Home apartment today is Susan Sheridan, who until now has been a renter, moving about five times in the past six years.

She had been on the trust’s waiting list since October, 2019.

Ms Sheridan said it was "surreal" to know she was finally on the property ladder — something which would not have been possible without the housing trust and her bank.

"They’ve helped me realise a dream of owning my own home.

"It’s just made everything possible."

The former aviation security officer, who starts a new job as a personal assistant at Harcourts Queenstown on Monday, said it would also be the first time she was able to have her "own space", without flatmates.

The cherry on top was that the cost of owning the apartment was about $236,000, with her 20% deposit, which was far cheaper than renting in the resort.

Ms Scott said it felt "really good" to hand over the keys to the new owners after three years of working on the project.

Last year, the trust received an interest-free $6.35million loan from the Government to use for 25 secure homes in New Ground Capital’s development.