By Matthew Mckew
0 Comments
Two years ago, NZSki first announced plans for a $16million replacement for the Sugar Bowl chairlift at The Remarkables. Finally, after red tape hold-ups, Covid-19 delays and a price hike, it opened to the public on Saturday. Matthew Mckew went along to see if the spend was worth the gain.

It's been a long time in the making, so no wonder area manager Ross Lawrence was kitted out, preparing to ride the chairlift as I arrived in the admin room.

From his beaming smile, it was easy to tell he was as keen as anybody to see the project completed and, with things running smoothly, take the chance to ride the 2.5km of trails opened up by the replacement Sugar Bowl lift.

"It’s an awesome day today - we’ve got a great crowd and a lot of enthusiastic people," he said.

"Even the ride up takes them over new terrain that I’m sure a lot of people won’t have seen before."

The lift and new trails were "vitally important" to improve the overall experience at the skifield and offered something for everybody, from novice to expert, he said.

Perhaps this is why NZSki and Doppelmayr Lifts (NZ) convinced the Government to give permission for an expert Swiss metal splicer to fly over, despite the border restrictions, and join the main haulage rope at the start of July. 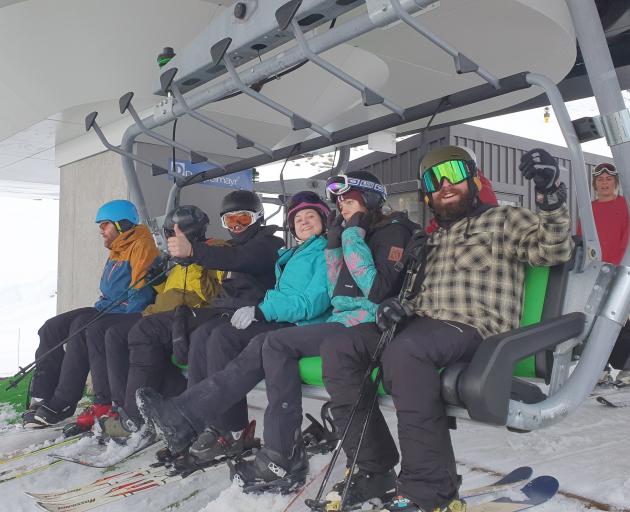 There were smiles and some nervous looks on the opening day of the new Sugar Bowl chairlift at The Remarkables. PHOTO: MATTHEW MCKEW
The lift was certainly looking popular, but with six seats abreast, queues moved swiftly — singletons sliding past the groups to bag an end chair.

Eager to try out the slopes, I shuffled along and found myself next to a group of all ages.

The eldest was impressed with the smooth ride and it was hard to disagree as we made our way up the mountainside, absorbing the stunning views.

The youngest of my companions bemoaned the lack of snow, something I would hear again as I mingled with the powder hounds.

But, having been on Coronet Peak the night before, I was happy to see a relatively untouched course, with a decent depth of powder.

As we sailed through the air, the various new trails came into view — to our left was the intermediate Serpentine snaking around the mountain, underneath was the advanced Lower Gallery and to the right was a range of paths, including the freestyle course.

The automatic safety rail sprang upwards as we arrived at the top and I was greeted with the familiar sight of shuffling snowboarders strapping up.

Picking my way through them, I saw an opportunity to canvass opinion and picked out three guys who had arrived early.

Shannon Barber told me he was particularly pleased with how the new chairlift went from the bottom to the top of the mountainside - unlike the old lift that started halfway up.

"Once you can traverse over to the [advanced] chutes, it’s going to be a really good thing putting the chairlift up so high."

As I slipped over the top, it was a slow start, passing by the busy freestyle area, with ramps, rails and obstacles.

After watching some successful and not so successful stunts, I pressed on, choosing the easy Casterway route.

From here, skiers and snowboarders could choose the advanced Fall Line, intermediate Cross Fall or continue on.

I carried on, before peeling off down the low-intermediate Gotham City Run. 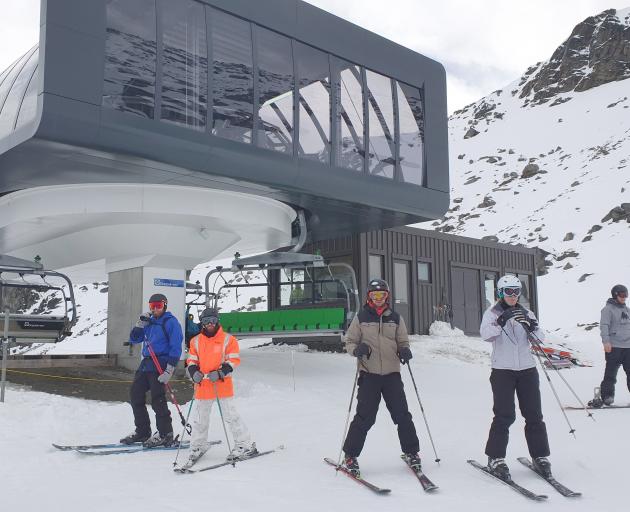 A smooth exit leads to the fork of new trails from the Sugar Bowl chairlift.
The Casterway continues into a narrow corridor curved around the side of the mountain, which gives boarders the chance to leap off the sides or newbie skiers time to practise controlled turns.

It’s my first season and Gotham was perfect for somebody still learning the ropes, but confident enough for short, steep sections.

Overall, the new lift and trails provide something otherwise lacking at the skifield.

It gives novices the perfect run after advancing from pizza-cutting to proper turns, without the difficulty of Centurion off the Curvey Basin lift.

For the more experienced, the Anzac trails are more accessible and the Lower Gallery affords an otherwise hidden view.

For now, the only chance to ride these new slopes is at the weekend and I can see locals taking full advantage.