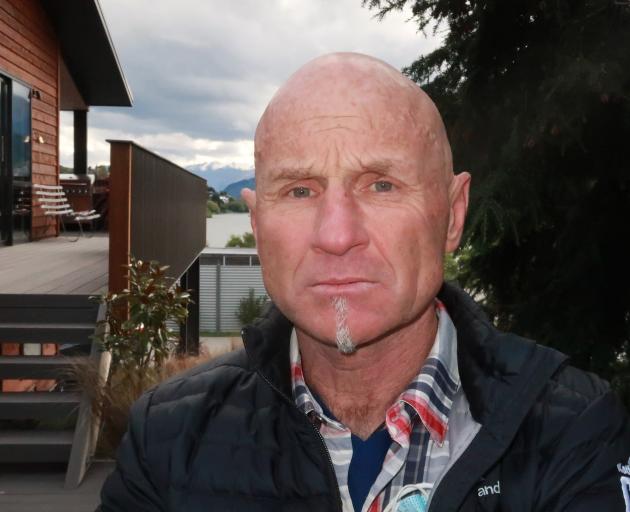 Boyes Cres resident Steve Gurney said some days he had been ‘‘gagging with the stench’’, and has had to shut his windows. PHOTO: PHILIP CHANDLER
Residents of Queenstown’s ‘‘Old Frankton’’ subdivision who have been complaining about the stench of raw sewage for about three years are at last being listened to.

Boyes Cres resident Steve Gurney said some days he had been ‘‘gagging with the stench’’, and has had to shut his windows.

Mr Gurney, a nine-time winner of the Coast to Coast, believed the problem was most noticeable during westerlies coming up the lake, and said it had worsened since the latest lockdown.

Complaints he had laid with Queenstown Lakes District Council (QLDC) and Otago Regional Council had got nowhere, he said.

Exasperated, Mr Gurney on October 1 contacted neighbours to see if they were also unhappy.

As a result, this week he petitioned QLDC with the names of 16 aggrieved householders, some of whom had also lodged complaints.

The petition urged the council to ‘‘fix the smell problem’’, give a deadline for fixing it, and provide independent certification it had been fixed.

Council infrastructure general manager Peter Hansby said, ‘‘this has been an unpleasant experience for residents, and we thank them for their patience.’’

The council had been taking steps to provide an interim fix, and a permanent solution, ‘‘thanks in part to local residents bringing it to our attention’’.

‘‘The issue is related to wastewater stagnating in the Hanley’s Farm pipeline and creating an odour as it flows to, and then from, the Frankton Beach wastewater pump station.

‘‘Things should be resolved when there is increased demand and flows helping to prevent stagnation.’’

A key part was an upgrade to the Hanley’s Farm wastewater pump station, due to be completed in the first half of next year, Mr Hansby said.

Meantime, the council was looking to install odour filters on Boyes Cres’ manholes, though it had ‘‘supply chain issues with our original preferred product’’.

Mr Gurney, who saw that response, asked why it had taken until now to learn ‘‘the truth of the problem’’.

He said he was keen to know if other Queenstown areas were suffering similar sewage whiffs from what he called Old Frankton’s ‘‘antiquated sewerage reticulation system’’.

Once again we have an illustration of how these Councils don’t know what they are doing! Regardless of the huge increase in rates their management of wastewater amounts to a load of incompetence. A well proven and tested treatment of stagnant sewage in pipes (used in Porirua I believe) is the injection of small quantities of hydrogen peroxide when necessary. This is cheap, simple and effective. However, so long as ratepayers are willing to put up with poor service, these Councils will continue to cr….. all over them!