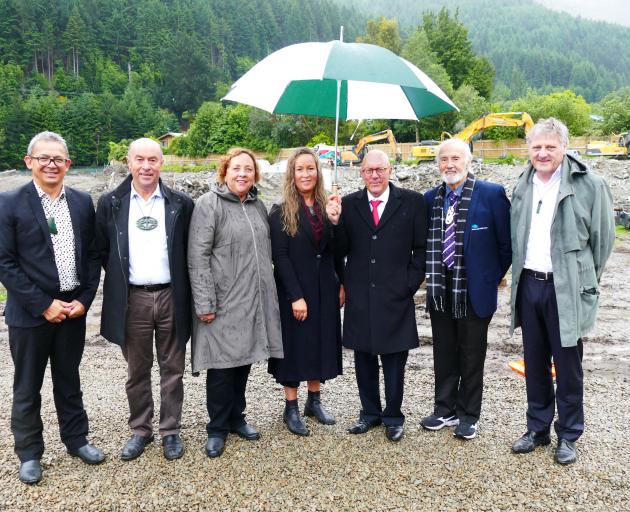 Ngai Tahu Property has planned a 300-plus housing development on the site, neighbouring Gorge Rd, which will include up to 100 KiwiBuild apartments.

Mr Potiki died in August — he was present when Ngai Tahu Property officially announced the development on the site in March.

Mana whenua working party member Paulette Tamati-Elliffe said the group, of which Mr Potiki was a member, reflected on their whakapapa in choosing a name for the development.

"Our whakapapa is everything to us — it brings everybody and everything together and we considered this place here, and what it meant to our people of the past, of the present and the future.

"Te Pa Tahuna is a fantastic opportunity for us to restore our traditional names back on the whenua [land] but it also lends itself to providing the concept, or a name, that is about a home ... for our people, whoever they may be.

"Today is about celebrating those ancestors of the past who left their footprint here for us to follow and, going forward, we’ll see many, many more people traverse this land, but it will always be a home."

Queenstown Lakes Mayor Jim Boult said he was "delighted" the site was to be used in "such an appropriate manner" and he looked forward to "the community coming alive".

"I really look forward to seeing the first people move into this site."

Ngai Tahu Property chief executive David Kennedy said the council had stood beside the company for a "long time" while it worked with the Crown to bring the idea to fruition.

Working with the mana whenua had resulted in a shared vision which would influence the development.

That would be seen in the cultural artworks around the development, sustainable green spaces, and ensuring Te Pa Tahuna provided warm, comfortable home for Queenstown residents.

"We are very grateful to the mana whenua of this unique part of Te Waipounamu for gifting the name Te Pa Tahuna. It carries the stories of the generations who have valued this area for centuries and reflects the aspirations of the people who live and work in this amazing place today. We look forward to delivering homes that live up to the promise embodied in this name."