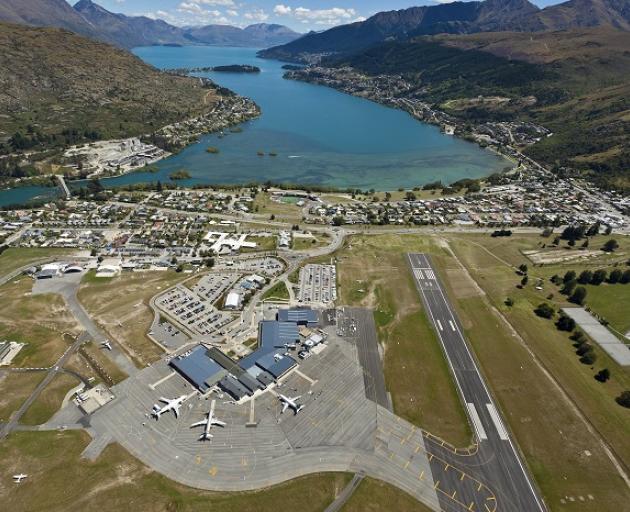 Queenstown Airport. Photo: ODT files
The irony was likely not lost on anyone in the room.

On one hand, Queenstown Lakes district councillors at their meeting yesterday afternoon were presented with an impassioned call to declare a climate emergency by Extinction Rebellion Queenstown Lakes.

They also, for agenda item 1, had before them the council's own draft climate action plan.

But, just two agenda items later, they would be asked to formally receive the Queenstown Airport Corporation's (QAC) annual statement of intent, which largely ignored much of the community's strong opposition to its expansion plans, and the environmental costs associated with them.

Councillors voted seven to four in favour of declaring a climate emergency and unanimously passed the draft climate action plan, which now goes out to public consultation.

The airport resolution narrowly passed not long after, six votes to five.

The QLDC owns 75.01% of the council-controlled trading organisation that is Queenstown Airport.

Mr Glover, who has announced his intention to stand for the council, applauded the council's climate policy.

"So how does the QAC statement of intent sit with the strategy?

"Our environment is spent. We have exhausted our environmental credit limit. We are mortgaged up to our ears, we have spent our children's environmental inheritance and we have the spectre of QAC peddling payday loans of carbon consumption on street corners."

More than 70 people packed into the council chamber for the monthly full council meeting.

Many were with Extinction Rebellion Queenstown Lakes (ERQL), including several children, while an equal number were from communities, particularly Kelvin Heights and Wanaka, who opposed the QAC's plans to increase the number of flights landing in the district by expanding Queenstown aerodrome's noise boundaries and massively upgrading Wanaka aerodrome.

Sonata-Joy McLeod was the main speaker in the public forum on behalf of ERQL.

She explained the tipping points of global warming, which experts forecast would displace 140 million people within the next 30 years.

"We're in the sixth mass extinction," she said.

Debate over the statement of intent, needed by Monday, followed.

Cr Alexa Forbes told airport chief executive Colin Keel she could not receive the statement of intent (SOI) in its current form.

"In March, this council clearly instructed QAC in its SOI it would need to address and provide clarity around ... noise boundaries, terminal redevelopment, sustainability, transport and to further align itself with community expectations."

Cr Forbes said she had asked for meaningful discussion with other airports about sharing the load.

"I asked for a meaningful approach to climate change and how the airport might respond to that and to Queenstown's concerns about over-tourism and growth ceilings."

She also asked about its ability to limit passenger numbers and the consequences. But the statement of intent received was completely inadequate, she said.

Her sentiments were echoed by other councillors, including Wanaka's Quentin Smith.

Mr Keel stressed the statement of intent related to where the QAC was in a process.

With some councillors indicating they could not accept the SOI, mayor Jim Boult proposed a compromise; it would be received subject to council directing QAC to pay attention to its concerns, with it committing to ongoing discussion and amendments to the approved SOI.