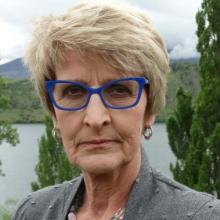 Cr Penny Clark
Some Queenstown Lakes District councillors are concerned the Queenstown Airport Corporation is not listening to community feedback.

Councillors received QAC's draft statement of intent 2020-22 (SOI) at a full council meeting yesterday, and two took issue with it, believing it deflected or simply ignored the concerns of 92% of the community regarding the expansion of noise boundaries.

"Dare I say, amongst all the lovely words and the intentions, I can't say I'm feeling the undertone of the community's lack of enthusiasm for any form of expansion," Cr Penny Clark said.

It was her belief the community was starting to find its voice to try to halt the rapid growth in the area, and limiting the expansion of Queenstown Airport was one way in doing that.

"Quite frankly I agree with them. We need to take stock and give ourselves a breather to understand what is important to our community and why visitors come here in the first place.

"I'm just feeling like this document is glossing over this, or put another way, your head is in the sand and you're hoping the community's concerns will just go away.

"Rather than ignoring, we need to embrace it."

Cr Alexa Forbes also took issue with QAC's plan for noise boundaries in the future, or rather, the lack of it.

"At the moment we have a key defined limit by the 92% who responded to your consultation on the extension of noise boundaries.

"That takes us to mid-2022, at which point there is no nod in this SOI to what happens after that point, except to reopen the discussion about noise boundaries. I don't think that's good enough, I think we need an alternative."

They were backed by members of the public who spoke during the meeting's public forum.

She believed it needed to be amended to "reflect the concerns of 92% of the community", "clearly state that the noise boundaries of the QAC are fixed and will not be increased or amended any further" and "reinforce that the airport will continue to operate within these fixed noise boundaries".

Fellow resident David Mayhew said QAC should make "no assumption in its plans that noise boundaries will be expanded".