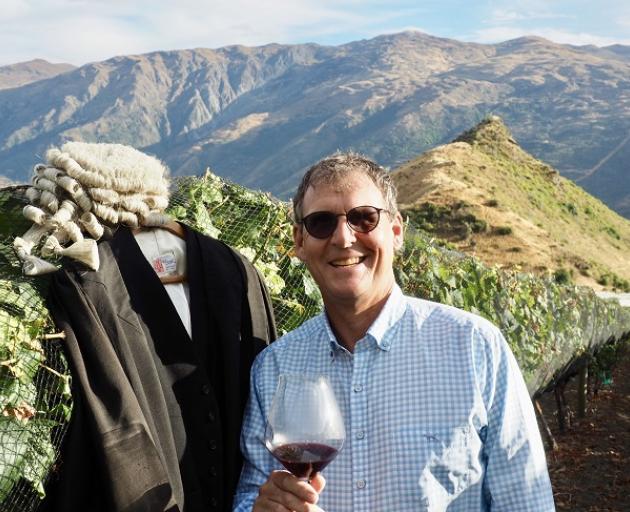 Nic Soper contemplates becoming a barrister while enjoying a drop of his own pinot noir, The Imbiber. Photo: Mountain Scene

After a distinguished career for two major law firms, Nic Soper is pulling pin to practise as a barrister. He discusses his work, and other interests like wine and cars, with Philip Chandler.

You’ve been a successful law firm partner for almost 30 years, the last 15-plus in Queenstown, where you’ve also been a top cog in your firm nationwide.

You’re still only 56 and you want to jack that all in?

To the surprise of many, Anderson Lloyd’s local managing partner Nic Soper retires from the partnership this Sunday.

After a four-month European vacation, he’ll then start practice as a barrister specialising in litigation.

Stressing he’s loved his time at Anderson Lloyd, Soper says ‘‘you get to that certain age where you want to have a bit of a change and do the things you haven’t done in the past’’.

Not that he hasn’t garnered a bulging CV already.

One gang member was acquitted and two were convicted.

He did another three murder trials in a row where the accused were all acquitted on the grounds of insanity.

Before leaving for Queenstown in 2003, he was offered the chance to join the Auckland judiciary.

‘‘I decided I was too young and I thought there were some great opportunities with Anderson Lloyd in Queenstown.’’

Before starting, however, he assisted the International Criminal Tribunal into the former Yugoslavia as an independent legal observer in Kosovo for six weeks.
‘‘I heard some terrible things about the genocides and the war crimes.

‘‘It was great to come back to New Zealand to think we’re not going to be subjected to those sort of things — which makes [Christchurch’s mosque murders] seem so bloody graphic.’’

Once in Queenstown, Soper started Anderson Lloyd’s local litigation practice, and for the past 12 years has headed its national litigation unit.

He’s also got involved in 100-plus health and safety investigations and prosecutions.

He was counsel for Pike River Coal, and chillingly recalls being with its boss Peter Whittall in 2010 ‘‘when he announced the third explosion, and that there was no prospect of any of the guys coming out alive’’.

Soper’s acted for the likes of Pak’n Save and Jack’s Point in Queenstown resource management cases, acted in a number of Court of Appeal cases and defended various police personnel in criminal cases.

He says he tried unsuccessfully to persuade the last government’s attorney­general, Chris Finlayson, to get a High Court registry for Queenstown.

He notes that ‘‘access to justice for people who haven’t got deep pockets can be a real problem’’.

Frustratingly, Soper says ‘‘if you do a really good job for a client, sometimes they’ll say ‘we were always going to win’, while if you get a bad result, it’s your fault’’.

He says a highlight was Anderson Lloyd winning NZ’s ‘mid-size law firm of the year’ award five years running — ‘‘they don’t give out those awards in cornflake packets’’.

Over the past two years, he’s widened his interests.

In 2017, he and his wife Ali bought Mt Rosa Lodge, at Gibbston, which Ali continues to run as a luxury lodge.

From 1000-odd vines, the property produces up to 1000 pinot noir bottles a season, half of which Gibbston wine pioneer Alan Brady sells under his Wild Irishman Three Colleens label, the other half of which go under Mt Rosa Lodge’s label, The Imbiber.

Except last year, due to a deer eating the shoots, they didn’t get a single bottle.

Last year Soper also trod the boards for the first time since university in Remark­able Theatre’s play, Away.

Speaking of which, he’s travelled across every continent, bar Antarctica, by train, and also visited 86 countries.

He and Ali also own a house in France where they’ll now spend more time.

He owns six British cars, too, including models like Aston Martin, Rolls Royce and Jaguar.