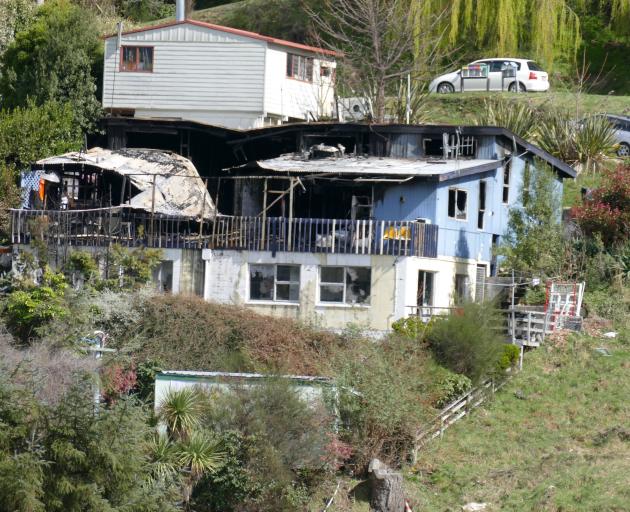 It took 25 volunteer firefighters, from Queenstown, Arrowtown, Frankton, Cromwell and Alexandra about six and a-half hours to bring the blaze under control after the first emergency call was made at 2am.

Three people were later taken to Lakes District Hospital, including landlord Conrad Goodger and his partner, but all were released by Saturday afternoon.

One resident, who asked not to be named, said she was in bed with her door locked when she was woken by the smoke alarms.

"I came out of my room and looked into the living room and there were flames everywhere."

Mr Goodger said he and his partner and her 10-year-old son were staying in a sleepout beside the property.

He got up to use the bathroom inside the unit when he spotted a couch on the deck outside the living room on fire.

"I looked down the house and saw the fire, it was like the Bible, the burning tree [but] it was a sofa on the deck."

He tried to put it out with water from the kitchen about 10m away, but "unfortunately the fire snuck a wee bit close to the window".

"The window burst and the next thing it was inside."

The property was split into four different tenancies — there were two tenants and two guests in the unit where the fire was, four people in the neighbouring unit, and two in a unit underneath.

Mr Goodger said his partner ran around the whole property to wake people up.

The 24-year-old woman in the unit where the fire started grabbed her phone and also ran to alert neighbours.

"We all went up to Huff St and that’s when it got really bad — we were really lucky, we got out at the perfect time."

The woman was left with nothing other than her cellphone and the pyjamas she had on.

She did not have contents insurance.

"But everyone’s OK," she said.

"That’s what I was happy about."

Mr Goodger said he was still waiting to see if his insurance would cover the fire — the two upstairs units were destroyed, but the units below and the sleepout appeared to have been saved "thanks to the expedient work of the fire [service]".

The woman had taken Queenstown’s Deco Backpackers up on an offer of free accommodation for a week, while she got back on her feet.

Owner Tim McGeorge also got in touch with the Salvation Army and it had pulled together a food parcel and clothes for any of the residents who needed assistance.

Mr Goodger said the initial indication was someone had flicked a cigarette on to the deck, which landed on the couch.