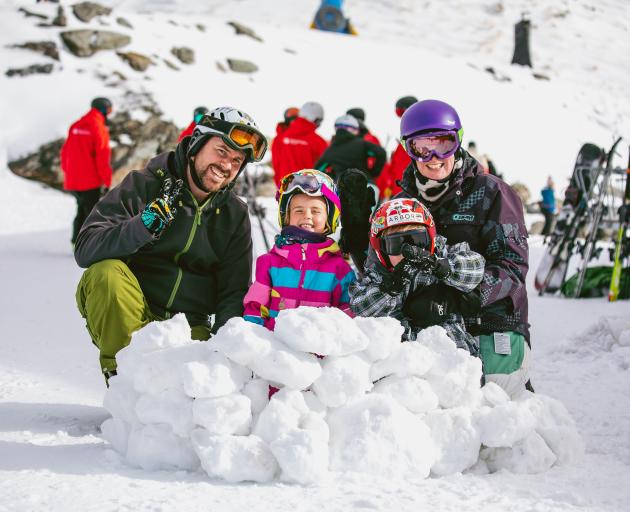 Enjoying opening day at The Remarkables on Saturday are Invercargill family (from left) Nic, Jean (5), Raff (4) and Pieta Hyland. PHOTOS: RACHEL KING
About 1700 skiers and boarders escaped a windy Queenstown and headed up to calmer conditions at the Remarkables ski area's opening day on Saturday.

After a warm May, cool temperatures during the past fortnight brought natural snowfall and allowed snowmaking to build up the cover on its groomed trails to about 60cm deep.

NZSki chief executive Paul Anderson said a 15cm snowfall on Thursday made a "massive difference". The Shadow Basin chairlift was the only lift yet to be opened.

As usual at the start of the season, the snow was a "little thin" off the main trails, but it was expected to build up in time for the school holidays early next month.

Among off-season improvements, the learners' area had been expanded by 30%, along with the addition of a second, 160m-long covered conveyor. 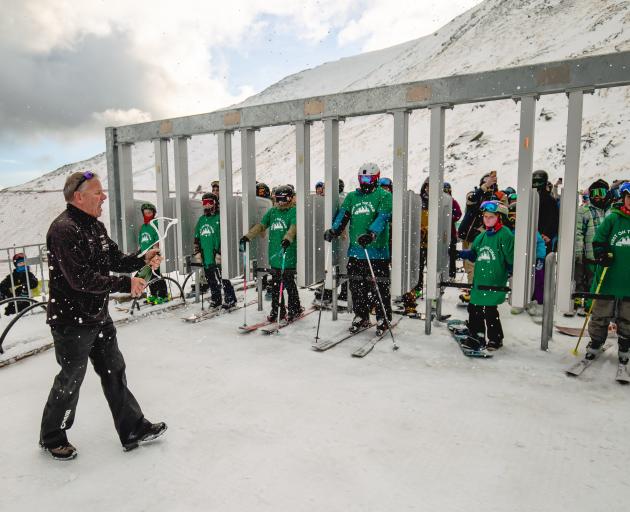 The Remarkables ski area manager Ross Lawrence pops the bubbly on Saturday. Ready to ride the first chair of the season are (from left) Sarah Johnson (14), Ruby Dowsett (14), Jano Le Page (12), Brendan Lindsay, Ken Ishii (12) and Alex Murray (12).
That enabled a better progression to the Alta chairlift above and its slightly more challenging terrain.

Other improvements included changes to the base building's kitchen to speed up hot food service, more indoor seating, and the addition of two new 4WD buses to its fleet.

Mr Anderson said Coronet Peak was on track to open this Saturday, with staff riding the new Coronet Express six-seater chairlift for the first time on Friday.

The $20million chairlift had the capability to store all of its chairs underground overnight so they did not get iced up.

The chairs could then be "dialled up" electronically to attach themselves to the lift in any desired configuration, he said.

The chairlift would be certified for use early this week.