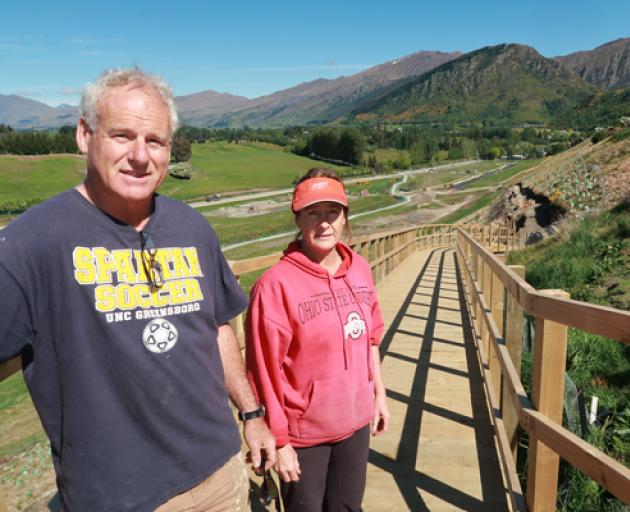 Derek and Anna Brown on a boardwalk that's sprung up by their section bounded by chicken wire fence, at right. Photo: Scene
Residents in Arrowtown’s Advance Terrace claim a raised boardwalk in front of their properties is an illegal structure, but the council disagrees.

As part of a council consent for the Arrowfields subdivision, off McDonnell Road, the developer’s forming a public walkway up to Advance Tce.

Couple Anna and Derek Brown were shocked to find a boardwalk – more than three metres high, smack-bang against their property – has been erected over the track’s final stretch, on land zoned ‘private open space – pastoral 1’.

Derek says he understood the track was to culminate in a few steps beside his property, which he’d planned to screen off.

"Somewhere between the consent happening and the [developer] building it, the council decided they’d instead build this, and not ask anyone if that was OK."

Apart from being "a visual blot", Derek says their privacy’s affected, with walkers and cyclists already using their boardwalk just metres from downstairs bedrooms. 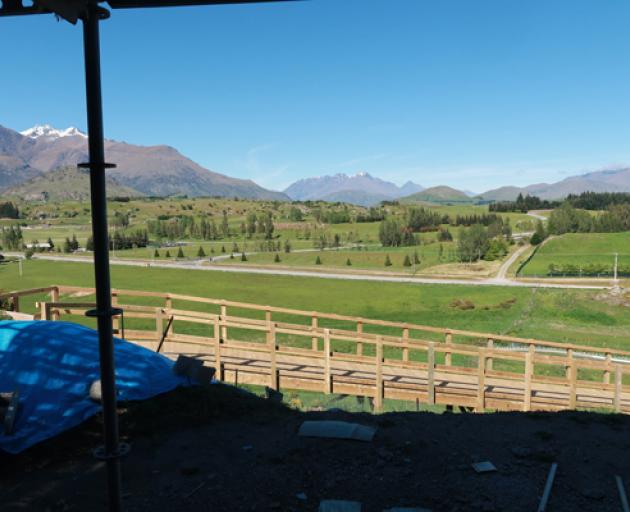 The boardwalk seen from the Browns’ house. Photo: Scene
Neighbour David Palmer, who saw the structure on returning from overseas last month, says "the first thing I thought was this looks just like the vehicle on-ramp for the interisland ferry".

"It’s ugly and a blight on the landscape.

"I think I’m speaking for all of us, we didn’t have an objection to a track, what we didn’t envisage was we were going to have a ramp."

He’s disappointed that the council, as author of the district plan, "just go ahead and break the rules, so the rule-makers are actually the rule-breakers".

Another neighbour, Greg Turner, says: "How [council] can claim what has happened there is OK is beyond me." 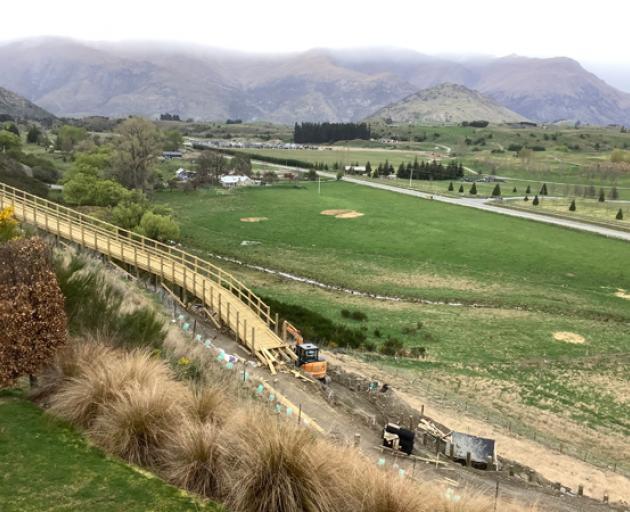 The boardwalk under construction. Photo: Scene
The neighbours have been advised the structure’s illegal because it hasn’t got a resource consent, and also breaches setback requirements.

They plan taking the council to the Environment Court over the structure’s alleged non-compliance with the district plan and its adverse effects on their amenity, including their privacy.

Council spokesman Jack Barlow says: "The footpath in question has been reviewed by both our planning and enforcement teams.

"Due to structural construction requirements, a minor change was made to the design of the footpath to turn it into a boardwalk.

"There was no change to the height, scale or scope of the structure, meaning it falls within the permitted bounds of its resource consent."

You have to wonder at Mr Barlow's thought processes. A flat path with a few steps is no change to the height, scale or scope of the structure. Not trying to be picky, but a footpath is usually about ground level. Not many are built 3 meters in the air.
How does he view a 5 storey building compared to a ground level car park? Yeah, about the same impact.

Or is this ramp actually all about pandering to bike riders who don't want to get off and move their bikes up a few steps? It would be great to see some real truth and honesty in these matters.

What is all the fuss about ??
There's a shiney new boardwalk that stops the annoying sound of gravel at every step you take, or going barefoot and standing in warm cow pat ... it's brilliant !!
The only real problem(s) I can see are that it'll become an ice rink in winter when the frosts arrive. The mould will start to form, timbers will start to warp and split, the tanalised timber will start to leach out toxic copper, chrome and arsenic, not to mention the fact that it won't last forever and will probably require routine maintenance and eventual replacement in 15 to 20 years, if not sooner ... and that won't be cheap.
I'm also guessing that the unruly BMX cyclists, forbidden or not, will make life interesting for the zimmer frame users or other people in need of walking aids ... and let's not forget about the skate boarders who'll probably try perfecting their Ollies, Nollies, Heelflip, Wallride, Pop Shove it 360, and Fakie Bigspin Tricks ... not to mention the landing flat on your face (or a$$) trick.

This walkway is absolutely fantabulous ... we need more of them !!