Success getting into top five designers 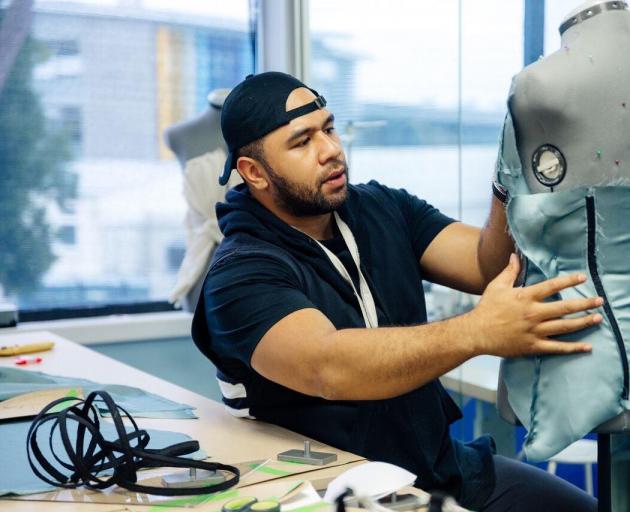 Queenstown fashion designer Peni Moala works on a garment during a Project Runway NZ challenge. Mr Moala was eliminated from the show on Monday night, and celebrated his experience by launching his first "BENi'' print collection. Photo: Tom Hollow
Queenstown fashion designer Peni Moala may not have won Project Runway New Zealand, but he has walked off television screens with his head high.

Mr Moala (30) was eliminated from the show on Monday night following a tailoring challenge, having made it to the top five.

''Going in to the show, I had three goals: tell my story, make an impact and to win,'' he said.

''They told us there were 8000 that applied, so being in the top 14 is an achievement in itself.

The show was fimed in Auckland over six weeks, where he worked for 15 or 16 hours a day, six days a week.

Every couple of days the up-and-coming designers were given a brief and had a set amount of time to design and create garments, judged by a panel.

''It pushed me to my limits and it pushed me creative-wise, just knowing that I have more to offer than I thought I did.''

Mr Moala was most proud of a jacket he created during an activewear/streetwear challenge which host and Victoria's Secret model Georgia Fowler was so impressed by she had to try on.

His biggest disappointment was an evening gown, inspired by jewellery, which landed him in the bottom two a fortnight ago.

''That was, construction-wise, really bad.

''That has to be my worst garment in the show.''

Since he finished filming, Mr Moala had been juggling his full-time job at Spotlight in Queenstown with creating his first BENi ''print'' collection.

He celebrated his elimination on Monday night by launching it online.

Next year he plans to launch his winter collection, which would be more focused on design and include his favourite pieces, coats and jackets.

Of the experience, Mr Moala said he had gained ''two amazing friends''.

He explained that with fellow competitors Beau Takapu and Misty Ratama, he had learnt the value of ''staying true to who I am and being myself'' and hoped he had inspired others.

''And, as a gay, Tongan man, I'm now one of those figures for people to look up to ... so my brown Tongan brothers coming out are comfortable.''