She’s back at work and wearing her infamous, infectious smile again thanks to Queenstown’s community spirit.

Finnish bartender Essi Lehtonen’s had a tough few months but the staff, regulars and friends of Frankton Arm Tavern rallied round her as she underwent heart surgery, removal of a tumour and lost the sight in her right eye from a stroke.

The young Finn went to bed with blurred vision in May and when she woke up, her partner Kyle Synam persuaded her to seek help.

Before long the 25-year-old was in Dunedin Hospital being told she’d had a stroke and would lose her vision in the affected eye forever.

It turned out a mystery illness three years ago, when she lost feeling in her left arm, had been a mini-stroke, caused by a heart defect.

‘‘It was really shocking, they said it’s really rare to have an eye stroke at my age.’’

Lehtonen’s first thought was to ring her Queenstown bosses, fearful she’d lose her job and life in New Zealand. 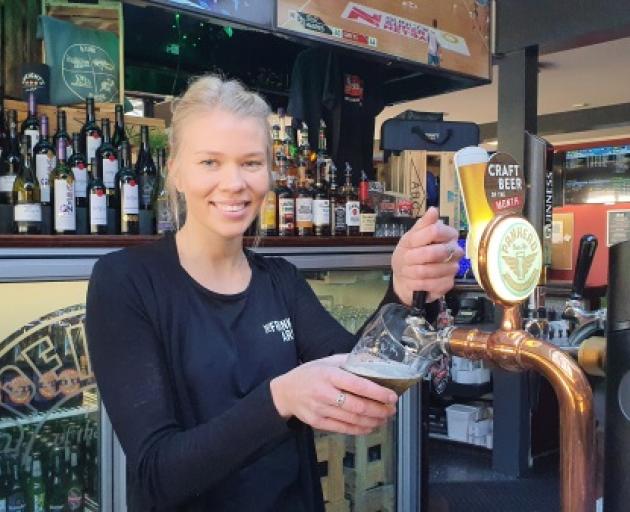 Essi Lehtonen's pulling pints once more at Frankton Arm Tavern following two major operations
But Eilis and Justin Fenton were quick to put her mind at rest and started fundraising to cover her medical costs, rent and bills.

Justin: ‘‘She’s a fantastic employee, a massive asset to our business, you can’t teach a smile like Essi’s, it’s infectious.

‘‘We’re going to help her through this and stick together as a family — as we should.’’

Locals at the tavern, 40 businesses, the wider community and friends back in Finland raised a whopping $22,000.

Lehtonen’s overwhelmed and grateful for the support — she had no income aside from the wage subsidy and no entitlement to ACC or health insurance.

The stroke was caused by a hole in her heart, so she was at home waiting for surgery to fix that when she was suddenly hit by paralysis, sickness and vomiting.

‘‘I was trying to ignore it and thought it’d be fine, but then at 3am, my boyfriend took me to the hospital and they sent me to Invercargill.’’

Doctors had found a stomach tumour and it needed to be removed.

After a lengthy wait, caused by the pandemic, Lehtonen finally had heart surgery on August 18 and returned to work this week.

‘‘It was nice to get back and do the morning shift, it already feels like I was never away.

‘‘[Tonight] I’m working a bit later and it’ll be nice to see everyone, hopefully they come in.’’

Life’s a bit different for Lehtonen, but she’s remaining positive as she slowly eases back to full-time hours, bit by bit.

‘‘I still struggle with my eye and spill a bit when pouring a pint, but otherwise, I feel fine.’’

One of the most difficult things has been the 17,000 kilometres between Lehtonen and her mum, who’s been unable to travel over because of the border closure.

‘‘She can’t really relax until she sees me — but I have my Queenstown family and I’m so lucky to have them.’’