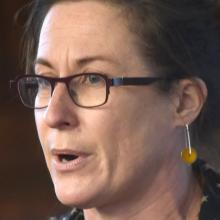 Maree Baker-Galloway.
The major backer of a huge education and technology campus planned near Queenstown has withdrawn its support.

An innovation and education hub, sprawling over 13.2ha, was originally tacked on to the housing development now known as Hanley’s Farm, next to Jack’s Point, in the shadow of the Remarkables mountains.

Now it appears dead in the water.

In a December 15 note to commissioners hearing the district’s proposed plan, lawyer Maree Baker-Galloway, who acts for the Jacks Point group of companies, said after consultation with landowners, residents and Queenstown’s council it now wanted a mixed residential and education area for the site, near Woolshed Rd.

Council experts were lining up to oppose the plan.

In a report written to commissioners last month, council planning consultant Vicki Jones said the proposed education and innovation campus "poses a significant threat to both the viability and vibrancy of the Jack’s Point and Homestead Bay villages and undermines the importance" of nearby commercial centres such as Frankton and central Queenstown.

If it went through as planned, an array of commercial development and accommodation could be built on the site.

Economics consultant Tim Heath, of Auckland company Property Economics, said in his report he had "significant concerns" over the "loose rules" in the education zone.

Added together, the planned Jack’s Point’s main village area and the education hub — which had no caps for the total allowable retail space — was "nearly twice the land area of the Queenstown Town Centre", he said.