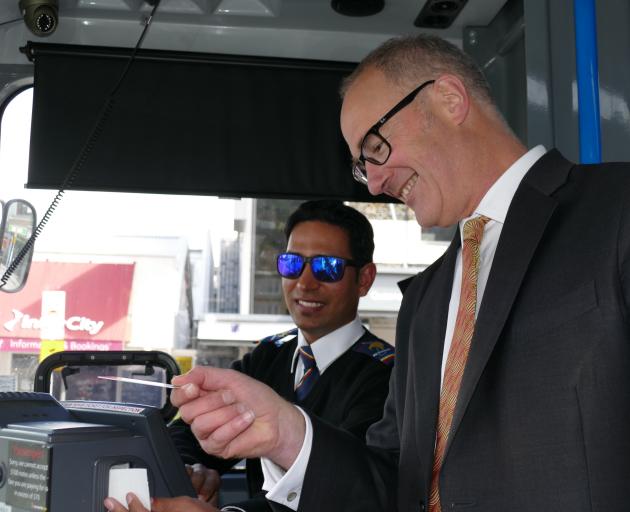 Minister Phil Twyford catches a Queenstown bus, driven by Mandeep Singh. PHOTO: DAISY HUDSON
It's not every day you see the Minister of Transport riding on a Queenstown bus.

But thanks to a GoCard giben to him by the Queenstown Chamber of Commerce, that was exactly what happened when Phil Twyford made a flying visit to the resort yesterday.

Mr Twyford, who is also Minister of Economic Development and Urban Development, spoke at a business lunch hosted by the chamber, addressing issues from infrastructure to housing and transport.

His visit was well-timed, coming days after the Government announced ministers had approved officials to work with the council to develop a local Bill.

Mr Twyford said it was fair, in the case of Queenstown, "to look at how we can raise revenue from the visitor economy".

The levy has been strongly pushed by Mayor Jim Boult, who introduced Mr Twyford as "this district's biggest supporter in Wellington".

There has been opposition to the levy model from some in the accommodation sector, including Queenstown mayoral candidate Nik Kiddle.

Mr Twyford said the precise details of the levy would be considered during the legislative process, but it was being council-led and he did not want to preempt the final outcome.

Conspicuous by its absence was any mention of the Government's controversial KiwiBuild policy.

Mr Twyford, who was in charge of the policy before being dumped as Minister of Housing, instead focused on the need to increase housing density.

He singled out the work of the Queenstown Lakes Community Housing Trust as "a trailblazer of innovative thinking about housing solutions in one of the most difficult markets in the country".

Mr Twyford took one of Queenstown's $2 buses from town to the airport.