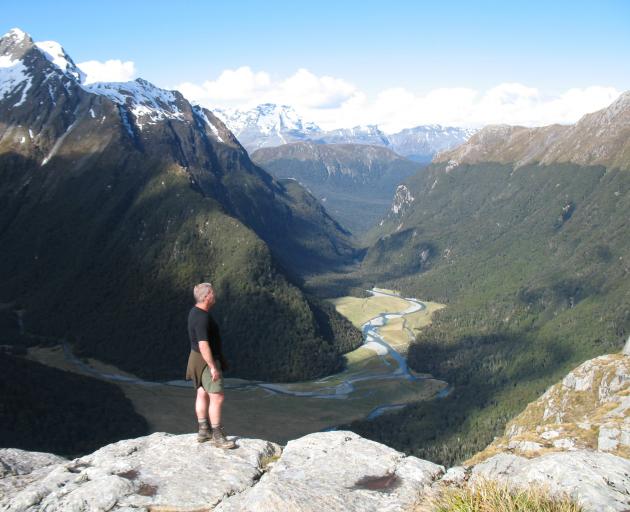 From October next year, international visitors will pay double the fee on the five most popular Great Walks, including the Routeburn, and 50% extra for the other Great Walks and back country hut passes. PHOTO:ODT
A visitor levy for Queenstown and a tourist tax at the border are off the table for National.

They are not needed, Prime Minister Bill English said in Queenstown yesterday.

But Queenstown Lakes Mayor Jim Boult still thinks it is the best way to help pay for infrastructure in the tourism mecca and he will continue to push for one.

Mr English announced in Queenstown yesterday his Government, if re-elected next month, would double the fee paid by international tourists on the five most popular Great Walks - Milford, Routeburn, Kepler, Abel Tasman and Tongariro.

Fees for overseas tourists on other walks and back country huts would be raised by 50%.

He said of the Great Walks' fees hike: ``We believe it's fair that those who are willing to travel around the world to have those experiences, help us with the real cost of maintaining those walks.''

But he later clarified the increases were not a step towards a general visitor levy.

``We just don't need an extra levy at the border. New Zealand is having good tourism growth now but we want to be careful about piling up costs and finding later it's too much.

``This is really just about Doc charging the cost for running that service.''

Asked about a possible visitor levy in Queenstown, Mr English said: ``We're not contemplating that.''

Queenstown has applied for funding, including money for a downtown bypass route, through the Government's $1billion housing infrastructure fund.

In May, Deputy Prime Minister Paula Bennett - who has ruled out a bed tax for Queenstown - said the Government could pour millions into special Queenstown projects, as long as they stack up.

Mr Boult told the Otago Daily Times yesterday the Great Walks fee hike for international tourists was ``a step in the right direction''.

``The Prime Minister and I have had a number of debates about a visitor levy generally and right now Government have signalled very clearly that they are going to assist us - and you heard that again today.

``That's fine, and I'm delighted and grateful for that assistance.

``But in the longer term I very much favour a visitor levy, because it's an eternal fix for the problem. It doesn't rely on the vagaries who may be in power.''

Asked if Queenstown was getting enough from central Government, Mr Boult said he would keep pushing for more.

The Government is confident overseas tourists will not be put off by the fee hikes.

``I think the international visitors will welcome the opportunity to make their own contribution.''

The estimated $4million raised by the increased fees would go back into maintaining the walks.

National's other announcement yesterday was to double the Department of Conservation's community funds, to $10million a year.

The Jean Malpas Community Nursery, opened in 2013, was established with $50,000 from Doc's community funds.

Mr Simpson said the nursery's part-time co-ordinator, Jo Smith, was paid from the community fund, which also funded the extension.

The nursery has about 10,000 plants and seedlings.