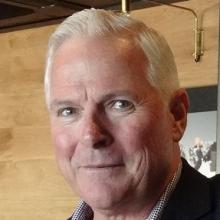 Michael Beagley
Alcohol  has been banned from Rodd & Gunn store functions after a hiccup at the opening party of its upmarket Queenstown bar.

The high-end clothing company has apologised for allowing guests at The Lodge Bar's invite-only opening function on August 26 to wander through a door to its retail store - something it agreed not to allow.

The handles on the doors to the retail store have since been removed and the key deposited in its Auckland office.

After a hearing in Queenstown yesterday, District Licensing Committee chairman Bill Unwin flagged that a ban on internal access to the store would be added as a condition of the bar's licence.

It was revealed yesterday that Rodd & Gunn chief executive Michael Beagley had a run-in at the opening bash with police liquor licensing Sergeant Tracy Haggart when she took pictures of the offending doors.

At the hearing, Mr Beagley told Sgt Haggart he ``thought you were trying to set us up for something'' and was disappointed to be inspected only hours after the licence was issued.

He denied telling Sgt Haggart on August 26 ``he should be able to do what he wants'' - something she wrote in her notebook.

Mr Beagley told the Otago Daily Times after the hearing: ``We just made a wrong call.

``I didn't realise that because the licence was issued that we'd be bound by the licence. I just thought we were having a private function.''

The Lodge Bar opened to the public on August 28. It has been inspected three times since and no problems were found.

Louvres are being installed across the doors as a further barrier.

Mr Beagley said the lesson from the hearing was the retail store and the bar ``don't live together''.

``We've got a long way to go before we can prove it's a concept that's got financial rewards. I love it, I'm proud of it, but it's got to pay its way.''

The opening function followed a $1.5million remodelling and fit-out of the Rees St store.

The Lodge Bar's menu was designed by Michelin-star chef Matt Lambert, co-owner of New York's The Musket Room, and the wine list put together by Cameron Douglas, New Zealand's first and only master sommelier.

Messrs Lambert and Douglas were present at the August 26 event.

Sgt Haggart said at yesterday's hearing The Lodge Bar was well managed and there were no signs of intoxication at the opening party.

But police had concerns Rodd & Gunn chose to disregard the committee's decision about installing a solid wall and worried that the doors might be reinstated.

Rodd & Gunn lawyer Jenna Riddle, of Anderson Lloyd, said the company had made mistakes, it did not intend to flout its liquor licence conditions and it took its responsibilities extremely seriously.