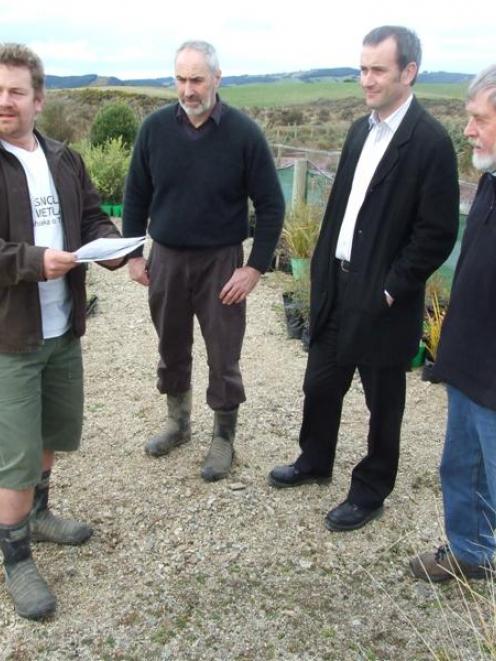 Sinclair Wetlands co-ordinator Glen Riley, Clutha district councillor Bruce Vollweiler, manager planning for Clutha District Council David Campbell and Sinclair Wetlands chairman Peter Johnson take a look at the site of a nursery to be built at the wetlands. Photo by Hamish Maclean
A plant nursery should be the focal point for visitors to New Zealand's largest privately owned wetland by this summer.

Mr Riley said the wetlands had benefited from 1000-plus volunteer hours already this year.

And the funding meant volunteers could remain busy on wet days - under cover in the nursery.

When visitors walk the 3.5km loop track around the restored habitat of more than 60 species of bird, they could learn the importance of the roughly 30 native plant species grown on site, through interpretative components at the nursery, Mr Riley said.

Visitors would start and finish the loop track from the nursery.

The wetlands were once an important food source for local Maori.

Sustainability was a focus for the wetlands, which was eco-sourcing seeds, used rainwater and worm composting.

Clutha district councillor Bruce Vollweiler said the wetlands were ''a valuable asset'' and the council grant reflected its importance within the Lake Waihola Waipori Wetlands complex as a destination.

Clutha Development Destination marketing manager Jo Lowery said she was excited the Sinclair Wetlands was promoting itself as an eco-tourism destination and embracing cultural tourism.

And while Mr Riley said he was keen to have more engagement with the Clutha community and surrounding schools, it was ''voluntourism'' that was doing a lot of the work at present. Planting at the wetlands was ''endless'', Mr Riley said.

Planting native species acted as one of the best ways to combat invasive weeds, and planting and working in the nursery was ''the perfect volunteer work''.

''At the moment, the plants are being grown in the back of the garage . . . sort of anywhere we can find some space,'' he said.

''And often it's a good job when the weather is poor.

''When the weather is good, we're out there pulling weeds and doing the grunty stuff.

''Having an enclosed nursery where we can have them work on a wet day is perfect.''