Both kindness and hostility after online appeal 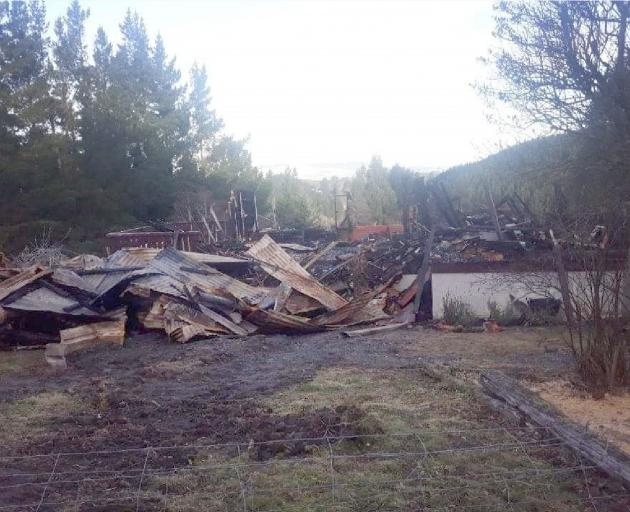 A Glenore family is counting the cost of under-insurance following a devastating house fire near Milton on July 2. PHOTO: STEWART FAMILY/SUPPLIED
"It's a part of our heart that's gone."

A South Otago family has called for compassion after losing everything but the clothes on their backs in a recent house fire.

After the Stewart family's "dream" home in the Manuka Gorge near Milton was destroyed by a fierce blaze on July 2, family friend Haydie McNulty set up an online donation page to help out.

Despite the generosity of many online and community donors since, Mrs McNulty said both she and the family had also been abused "horrendously" by some social media users critical of the fundraising appeal.

"It seems just because the family has some insurance and had worked hard to set up a nice home, they're somehow not deserving of the same compassion as others who've experienced similar, terrible losses.

"Unfortunately people are too quick to judge. It costs nothing to be kind."

Amanda Stewart, who moved into the 12ha lifestyle property with partner Mike and her two children a year ago, told the Otago Daily Times the family's insurance was unlikely to cover everything lost.

Most heartbreaking was the forced rehousing of many family pets, including cat Barry and new Labrador puppy Murphy.

"We'd only just welcomed Murphy to the family, so to let him go so soon breaks your heart. Because the house contained asbestos, we don't know how long it will be or how much it will cost before we can get back to our wee home, so we don't know when we might see them again."

In the meantime, the family was living in a Dunedin motel, meaning additional travel was also contributing to their distress.

"If anything good comes of this, I'd just like others to reassess their level of cover, because it's one of those things you forget and let slide over the years.

"Then there are the little things you suddenly remember you've lost, like precious family photos and mementoes."

Mrs Stewart said she had lost several small heirlooms from her recently deceased father in the fire.

"Some things are just irreplaceable. We're beside ourselves."

Although the "hostility" of social media trolls had added to the stress of the situation, the family had also been "stunned" by the "kindness of strangers".

"We're so grateful to the community that's pulled round and been so generous with simple things like hoodies for the boys and encouraging words.

"At the end of the day my family's safe, and that's all I really care about."

Donations can be made at givealittle.co.nz/cause/manuka-gorge-house-fire.