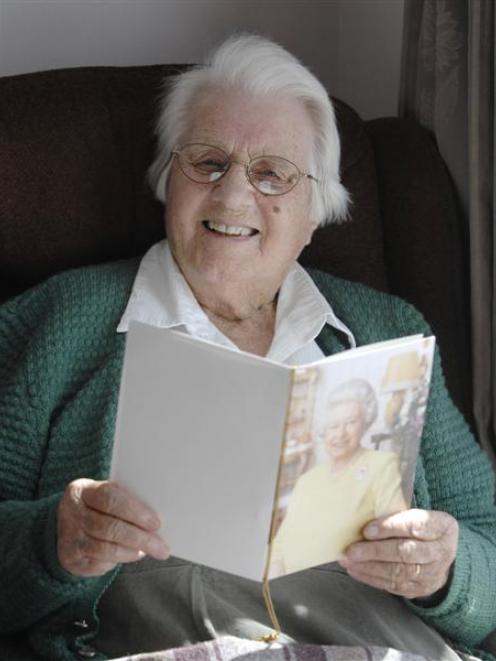 Kate Heads chuckles at her 100th birthday wishes from the Queen. Photo by Linda Robertson.
She might be 100, but Milton centenarian Kate Heads can still make the most dispirited people cackle.

Today, when she celebrates her 100th birthday with son Colin, her nieces and nephews and 37 assorted cousins, Mrs Heads will, without doubt, be the centre of entertainment at Milton's Ashlea Grove rest-home.

Upon announcing she had received the customary birthday wishes from Prime Minister John Key and Deputy Prime Minister Bill English, she added, "I got a nice card from the Queen too, but she didn't send me a cheque or anything with it.

She can afford it. Disappointing I know, but I won't hold it against her."

During an interview yesterday, Mrs Heads said the milestone would be a day of mixed emotions.

While she was quietly excited about the day ahead, she was aware of some of the pitfalls of longevity.

One of the hardest things had been outliving husband Harry, son Brian, and six brothers and sisters, she said.

"I don't see it as though I've done anything special - I've just lived day by day.

Mrs Heads was born in Milton and has lived most of the past century there.

She attended Tokomairiro District High School and then became a house maid at Milton Hospital, which is now the Ashlea Grove rest-home.

"When I walk through the corridors now, it's just like being home. I'm not my own boss anymore, but it reminds me of my youth," she said.

Mrs Heads has been a keen sportswoman throughout her life.

She was a New Zealand hockey representative and was selected for a tour to South Africa, which was cancelled with the outbreak of World War 2.

She was also a keen bowler and was South Otago singles indoor bowls champion of champions in 1976.

Along with her active sporting lifestyle, Mrs Heads said her secret to longevity and independence was eating porridge for breakfast every morning with top milk.