The Clutha District Council offices in Balclutha. PHOTO: Google
A southern council may continue to adopt increased security measures at its offices, following a recent surge in threats to personnel.

The Clutha District Council took the unusual step of posting a security guard in the foyer of its Balclutha headquarters last Thursday, during hearings on a new beach access bylaw.

The council also received a petition on Three Waters from rural activism group Groundswell during its afternoon meeting. 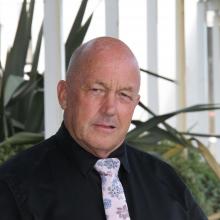 Bryan Cadogan.
Clutha Mayor Bryan Cadogan said this was the first time the council had hired physical security for its Balclutha offices, a situation he described as "drastic and concerning".

"I believe the last couple of years have challenged us all [and] there is an understandable angst and adjustment being made in society. We are now seeing the situation manifest itself in some members of the public overreacting.

"Some are captured and emboldened by the internet, taking their Facebook warrior statements out into the public arena.

"Gatherings where inflammatory and false rhetoric is allowed to run away with itself have increasingly led to situations, never witnessed before in Clutha, of a pack mentality and obscure and concerning outcomes.

"I hope this is only a temporary stage, but it would be naive and inappropriate not to ensure the safety of front-line staff."

Although both meetings had passed civilly and without incident on Thursday, council chief executive Steve Hill said it would continue to "assess risk", and would not rule out using contracted security again.

"On that day we had two contentious issues that were being addressed. Experience in public meetings on both matters has shown there was an increased level of agitation in the community.

"We ... make decisions based on ensuring the health, safety and wellbeing of staff and customers alike, and also to ensure the orderly conduct of business."

Mr Cadogan said the issues the council faced appeared to be part of a wider phenomenon.

"I also am hearing of similar behaviour at our local hospital, to retailers and basically anywhere that the public interact, and it is totally unacceptable that a small percentage of the public are acting so poorly."

Earlier this month, Balclutha medical facility Clutha Health First made an appeal for "kindness and consideration" to its staff, following a marked increase in "verbal aggression" from patients.

Proposals to restrict vehicles on several of the district’s beaches have proven controversial, attracting 1080 submissions.