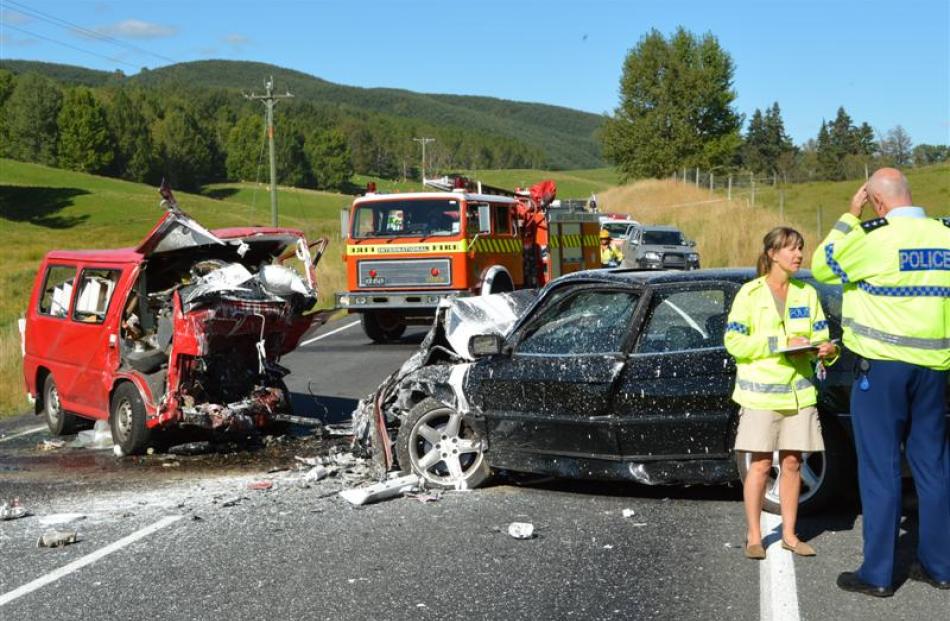 Detective Sergeant Kate Bartlett, of Balclutha, talks to Inspector Alastair Dickie, of Dunedin, at the scene of a serious crash near Lawrence yesterday. Photo by Helena de Reus.

Two men were flown to Dunedin Hospital after a car and a van collided head-on near Lawrence yesterday afternoon.

Emergency services were called to the crash on State Highway 8 at Evans Flat, about 6km northwest of Lawrence shortly after 3pm.

Senior Constable Murray Hewitson, of Owaka, said a BMW V12 M series sedan, being driven towards Lawrence by an 18-year-old Middlemarch man and a Mitsubishi van, being driven by a 62-year-old Central Otago man, collided head on.

Both men suffered moderate to serious injuries and were flown to Dunedin Hospital by the Otago Regional Rescue Helicopter. Further details on their conditions were unavailable last night.

The driver of the car was easily extracted but the van driver was ''severely trapped'' by the front chassis.

Mr Tisdall said it took between 35 and 40 minutes to cut the man free.

Cans of paint from the van had splashed their contents on the wreckage of the two vehicles and across the road.

It was too early to state the cause of the crash, Snr Const Hewitson said.

Traffic was diverted along nearby gravel roads for several hours while the scene was examined by a serious crash investigator and cleared.