Jude Patterson is a woman who can stand the heat.

Lawrence Volunteer Fire Brigade’s new chief fire officer expressed a mixture of pride and humility on learning she had been promoted to the role recently — becoming the town’s first female chief in its 127 years of operation.

Although she was at pains to portray the appointment as ‘‘business as usual’’, the volunteer firefighter of nine years’ standing acknowledged the move to female leadership might bring with it subtle changes in style.

She said despite there being only ‘‘four or five’’ women CFOs when she began in the service in 2011, that number had since doubled. 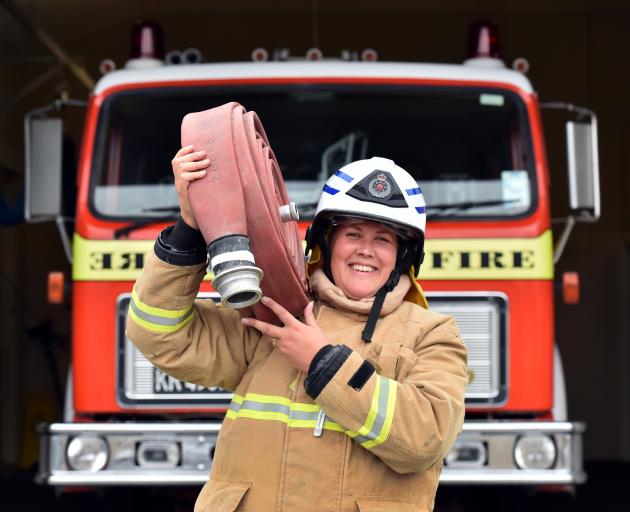 Jude Patterson is the first female chief fire officer in the Lawrence brigade’s 127-year history. Photo: Peter McIntosh
Although only 4.7% of career firefighters were women at present, they comprised more than 18% of volunteers.

‘‘It’s still a relatively small part of the service, but definitely a growing phenomenon.

She said each brigade member brought unique life skills to the team.

Those of female members tended to be ‘‘soft skillsets’’.

‘‘Obviously, it’s not exclusive to female firefighters, but they can bring good communication, networking and relationship-building skills with them to the table.

‘‘A successful team is about the widest range of skills complementing one another.’’

Among several ambitions for her tenure, Mrs Patterson said she wanted the brigade to become more ‘‘intertwined’’ with its community.

‘‘Lawrence is always amazing at stepping up in a crisis. If we can all learn how everybody else operates, we can be as effective as possible when those occasions hit.’’

A sheep and beef farmer and community volunteer during her off-duty hours, she paid tribute to her family for its support.

‘‘My husband Mark [Patterson, MP] and mother Joan are the reason I can do this.’’

Her daughters, aged 10 and 12, had also encouraged her.

‘‘This shows them women can do anything.’’

Sitting surrounded by 127 years of male forebears’ portraits in the Lawrence station common room, she said she hoped to illustrate gender today was a ‘‘non-issue’’.

‘‘Seeing these faces only makes me aware of what a pride and privilege it is to be in this position.

‘‘I’ll be working hard to make sure it’s a tradition of service to our community that grows and continues.’’