The Ag & Auto Direct co-owner is racing to reopen his Barr St business by the end of today, despite his workshop burning beyond repair yesterday.

‘‘There’s nothing salvageable in the workshop.

‘‘We’re devastated, but we’re very relieved that the staff are all safe and well.

‘‘We’ve lost a lot of customer vehicles and property and tools — everything inside. 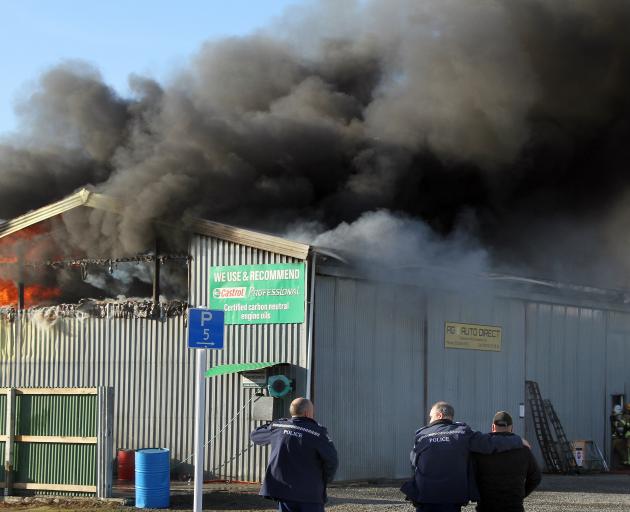 An emergency services member offers support to Ag & Auto Direct co-owner Paul Goatley yesterday after a major fire at his Balclutha workshop yesterday. Photo; John Cosgrove
However, he said the business was insured and yesterday he was already picking up the pieces in a bid to restart work in his home garage later today.

‘‘We will be able to carry on with our business, because the showroom and parts department were not damaged in the fire.

‘‘We’ll probably do the mechanical work from my own workshop on Gormack St.

‘‘It’s important to say that we’re still open for business because we need as many customers as we can get, to keep it all ticking over.’’

He said the local business community’s support was having a major impact on his ability to keep going, despite the setback.

‘‘The response from the community has been overwhelming.’’

Fire and Emergency NZ shift manager Andrew Norris said four appliances, from Balclutha, Milton, Kaitangata and Waiwera South, were called to the blaze about 9.50am, and the Fire Command Unit from Dunedin also attended because the building contained hazardous materials. 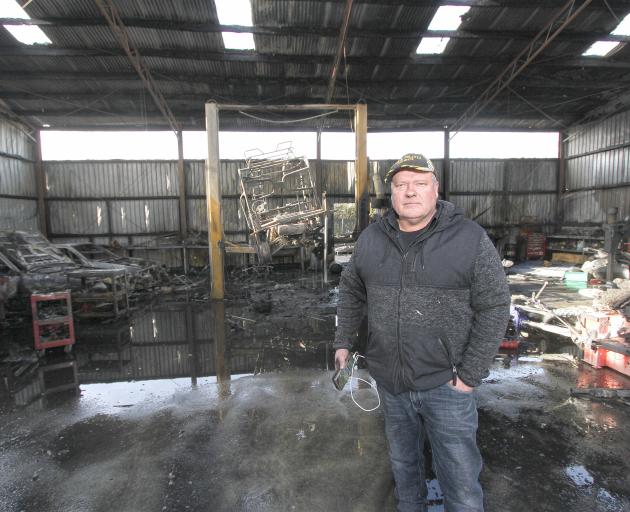 Mr Goatley stands inside the shell of the burnt-out workshop.PHOTOS: JOHN COSGROVE
There were reports of explosions in the building and it was thought drums of oil, acetylene gas and oxygen were in the building.

As a result, authorities evacuated businesses in the immediate area, and because the smoke was toxic, nearby residents were advised to isolate themselves indoors and keep doors and windows closed.

Barr, Clyde and James Sts were cordoned off and traffic was diverted through the western side of the town, which caused delays for about an hour.

At the height of the fire, flames could be seen leaping from the building and a thick pall of smoke was visible across much of Balclutha.

Mr Norris said the fire was not thought to be suspicious, but an investigation would be conducted to determine the cause.