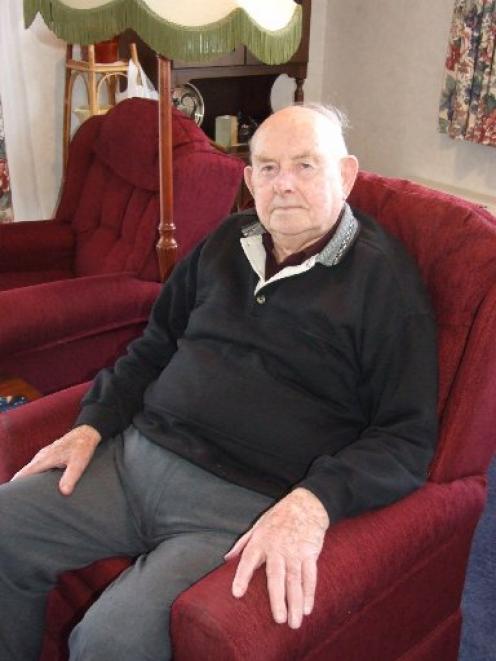 Balclutha man Norman Maze says he needs his hour's housework help because of pain associated with arthritis. Photo by Rachel Taylor.
A 90-year-old Balclutha arthritis sufferer says he was caught unaware by "cunning" questions over the telephone in an interview to establish whether he should keep his home help.

Former farmer Norman Maze unsuccessfully appealed to keep his housework assistance of an hour a week.

The telephone interview was in response to his appeal against losing it, about which he was told by letter.

He wished the person had come to his home and "talked it over", rather than phoning.

"That sort of riled me."

At first, he was not sure what the person was calling about and was caught "unawares".

He regrets taking part in the telephone interview, and did not realise he could request an assessment in person.

Mr Maze was unable to pinpoint the unsettling questions, or why he regarded them "cunning", but the process left him feeling uneasy.

In a recent letter, Southern District Health Board funding and finance general manager Robert Mackway-Jones told Mr Maze his appeal was unsuccessful as no "exceptional circumstances" had been identified.

Mr Maze said he was independent and cooked for himself.

He has had the help about a year.

He was doing his own housework now, despite suffering pain from arthritis.

"My knees give me hell."

Mr Maze replied to the district health board, sending the Otago Daily Times a copy of the letter.

The World War 2 air force veteran wrote: "Seventy years ago I went to war to protect the kind of life you enjoy today . . .

"But today we are called upon to try to deal with another enemy who dictates our very existence and way of life.

"They are insidious, faceless bureaucrats whom you represent, and all they think of is the almighty dollar".

When contacted, Mr Mackway-Jones said the board did not discuss individual cases in the media.

He stood by the telephone interviews.

"People are advised earlier that an assessment process is to be undertaken and a time arranged with the assessor checking with people to ensure they are OK to proceed via phone."

Mr Mackway-Jones said telephone interviews were conducted fairly, and "quite a number" resulted in people keeping their help.

Since March, the board has been cutting the help of thousands of elderly people in Otago and Southland, because it was providing more domestic assistance than other DHBs.

Those receiving up to an hour and a-half lose their housework unless exceptional circumstances are established; those receiving more help are being reassessed case-by-case.