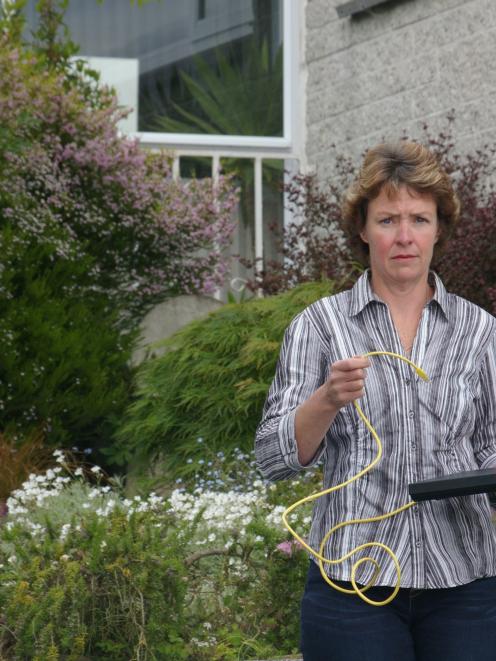 Balclutha parent Julia Hunter believes Wi-Fi should be banned in New Zealand classrooms. Photo by Hamish MacLean.
A Balclutha parent has resigned from her school's board of trustees because she believes it is not taking her concerns about Wi-Fi in classrooms seriously.

St Joseph's School (Balclutha) board endorsed the use of wireless connectivity in its administration block and a senior classroom after assurances from the Ministry of Education there were no health implications for pupils.

Many New Zealand schools operate Wi-Fi in classrooms, but former board member Julia Hunter said she had serious concerns the Government was not paying attention to the growing evidence of biological damage being caused by Wi-Fi, and instead continued to reassure boards everything was safe.

''Sadly, our New Zealand standard is 15 years old and was set on the thermal heating of a 90kg man after only six minutes of exposure.

''Our children . . . are being exposed to this equipment for six hours a day, five days a week.''

Mrs Hunter said the New Zealand standard was based on the heating or burning of body tissue over a short period of time, but the standard did not take into account any non-thermal biological effects that may arise from prolonged or accumulative exposure to Wi-Fi.

Children were among the most vulnerable to microwave exposure because their undeveloped bodies absorbed five times more radiation compared to an adult's body, she said.

Their skulls were only 0.5mm thick compared with an adult's skull which was 6.8mm thick, she said.

''Already, the alarm bells are ringing in Germany and France, who have withdrawn Wi-Fi in schools and opted with hard-wiring in their schools.''

Mrs Hunter said there had been no long-term scientific studies conducted on the harm the equipment was doing to children, and in 2011 the World Health Organisation re-classified Wi-Fi electromagnetic as 2B, a possible carcinogen.

'' ... governments have made mistakes in the past with tobacco and asbestos.''

Mrs Hunter said she was not against the use of technology in schools. Rather, she wanted it to be used in a safe way, such as using hard wiring instead of Wi-Fi.

''Exposures are low for three main reasons. The transmitter (or router) is low power; the signal strength quickly gets weaker as you move away from the router; and a signal is only transmitted when data is being transferred (except for brief `beacon signals').

''Exposures from Wi-Fi are significantly lower than cellphones. The class 2B classification is also shared with everyday items such as coffee, pickled vegetables, talcum powder and sunblock.''

Dr Stoop said the Ministry of Health had advised no special precautions were needed when using Wi-Fi equipment. However, if people wished to reduce their exposure even further, they could place their router point on a high shelf, or away from where people might sit and work.

It was also recommended Wi-Fi-enabled laptops be placed on a table rather than directly on the lap when working.

''At its most recent meeting, the committee concluded that there was no new research that would lead it to propose any changes to current ministry recommendations.''

St Joseph's School (Balclutha) principal Annette O'Mahony said the board's decision was made after considering the latest information from the Ministry of Education and the Ministry of Health.

''Any updated information and guidelines released by these two agencies will be monitored and taken into account,'' she said.