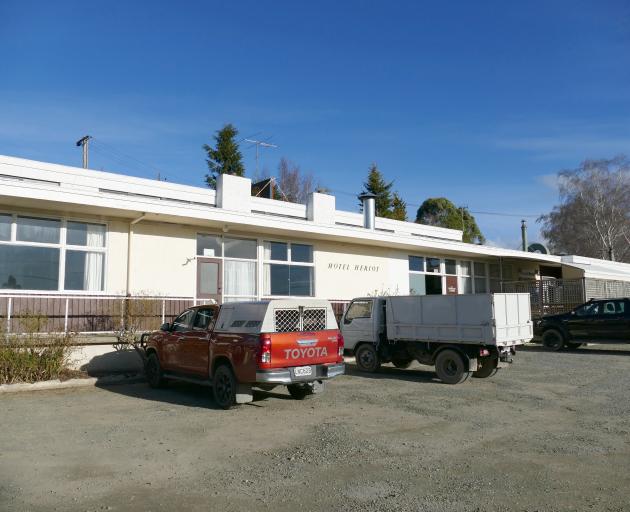 Last orders? The Heriot Hotel may be under threat of closure due to alcohol licensing compliance issues. PHOTO: RICHARD DAVISON
Efforts this week to block a new liquor licence for the Heriot Hotel reflect an increased drive to stamp out alcohol-related harm in South Otago, police say.

On Tuesday, Balclutha and Gore police spoke strongly in opposition to the renewal, during a Clutha District Licensing Committee hearing in Tapanui.

Yesterday, he told the Otago Daily Times the force was putting additional resources into alcohol-harm reduction in the district, due to the demands placed on officers by its uncontrolled use.

Although he did not believe the overall situation in South Otago had worsened during recent years, he said the types of offending — and the harm they caused — were more visible today.

"There are new generations coming through now who have a different relationship with alcohol.

"As a rural area, that comes with its own special set of problems, which include drink-driving and public disorder within and outside venues."

He said a rising problem with disorder and assaults outside Balclutha’s pubs last year had been curbed thanks to co-operation with the Clutha Licensing Trust.

"There were a few problems in the 2am to 4am period Sunday mornings leading to injuries and arrests.

"Working with the trust, that’s dropped off significantly now, and there are other steps that may occur down the track to help consolidate those efforts."

Among the more serious incidents, a "coward assault" had taken place outside the Hotel South Otago last year, he said.

"An individual was hit unexpectedly from behind and suffered a serious injury. Fortunately, they made a recovery, but these are the incidents we don’t want to be seeing at all around here."

Drink-driving and alcohol-involved crashes were another pressing issue, he said.

During Tuesday’s hearing, police identified 12 drink-driving incidents from the past three years, including one crash, in which offenders had been drinking at the Heriot Hotel.

Sgt Leadley highlighted the success of the *555 driving information line in identifying drink-driving and other dangerous driving.

"Those thinking of drink-driving need to know it’s just not publicly acceptable today, and that’s reflected in the big increase we’ve seen in the public’s use of *555 to report dangerous or suspicious driving to the police."

He said Tuesday’s case emphasised holding a liquor licence was a "privilege, not a right".

"Police National Headquarters is investing more in training in this area of alcohol harm, like methods to assess the suitability of liquor licence applicants.

"We’ll continue to engage, educate and enforce in line with national standards, as each situation demands."

The licensing committee expects to release its decision on Heriot Hotel by next Friday.