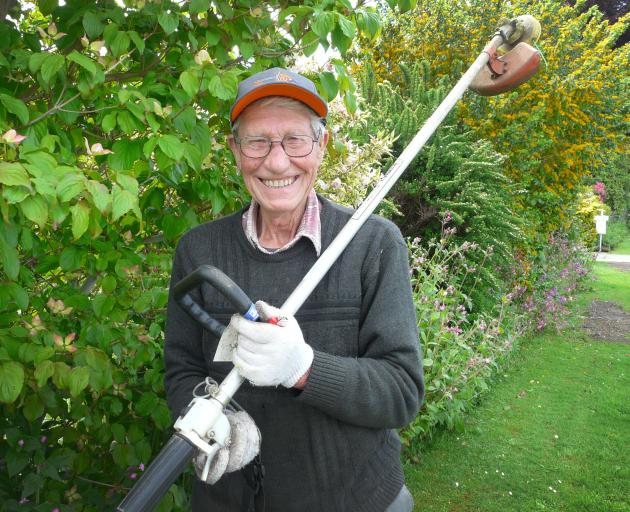 Tapanui resident and gardener Les Gergely says he welcomes new council measures to conserve water in the town this summer. Photo: Richard Davison
Clutha District Council has stepped back from plans to reduce water pressure in Tapanui this summer.

The measure was one of several endorsed by the West Otago Community Board in August in an effort to improve water conservation in the town.

Council operations manager Gareth Phillips said pressure reductions would now be revisited after ''gauging the effectiveness of other measures''.

Since September 2017, seasonal water levels in the town's reservoir have repeatedly fallen below 50%, at which point issues can arise with fulfilling demand and providing for emergency services.

Mr Phillips said staff were close to finalising a package of measures for the town this summer, which would target ''low-hanging fruit'' by looking for leaks and ''obvious'' water wastage.

A ''water services officer'' would be appointed to work with the community to address leakage and waste, he said.

At peak times during summer, usage in Tapanui was more than double the national average of 227 litres a day, at an average 500 litres.

A large part of this was attributed to garden watering, meaning this was one area that would be targeted through ''community education''.

Education could include leaflet drops and other media messages, and extend to door-to-door discussions in ''problem areas'', he said.

Zonal metering to establish such areas would also go ahead, and was likely to be in place by Christmas.

However, a proposed, centrally-located ''fire danger''-style water conservation sign was unlikely to emerge this year, although it remained under consideration, Mr Phillips said.

Tapanui gardeners quizzed by the Otago Daily Times yesterday were realistic about the measures.

Les Gergely, who lives on Bushyhill Street, said he had lost about 50 vegetable plants after water restrictions last summer.

He did not collect rainwater, and believed summer restrictions were ''inevitable''.

''I don't think some people realise if we don't play it right, everyone will suffer. If dropping the pressure is what it eventually takes, so be it.''

Neighbour Terri Crawford was similarly unruffled by the idea of additional restrictions.

''I already collect rainwater for my dogs, so if I needed to extend things that would be fine.

''The pressure's probably a bit high at the moment anyway.''