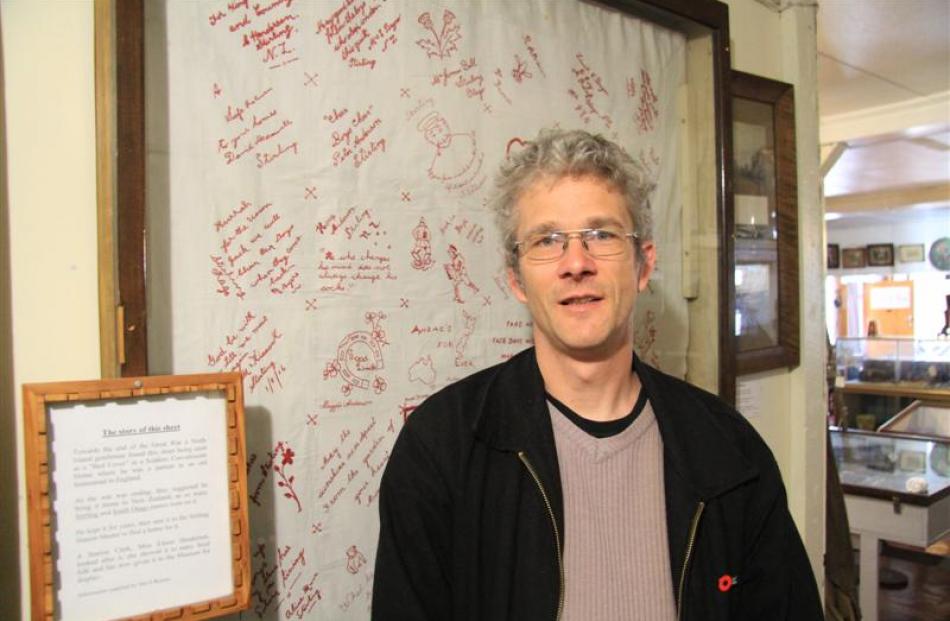 South Otago Museum curator Gary Ross says the Red Cross of Stirling's WW1 bed sheet recently discovered in England should come home to South Otago. One made months earlier, behind him, has already been returned to the area. Photo by Hamish MacLean.

A bedcloth with hand-stitched messages of support for Anzac troops in World War 1, made in Stirling, South Otago, was discovered in a small English town and will be a part of World War 1 centenary commemorations in England.

The cloths were made by the Red Cross during the war to physically and spiritually comfort injured troops in convalescent hospitals overseas, South Otago Museum curator Gary Ross said.

''We're actually in a better position to help research the objects in the host communities,'' he said.

TVNZ reported last month the cloth was saved from a family bonfire in the small English village near London and now resides in the New Zealand High Commission New Zealand House in London.

In his 13 years at the museum, three cloths had been returned to the area - one to Milton, one to Owaka and one to Balclutha, Mr Ross said.

The South Otago Museum cloth was made in July and August 1916 by the Red Cross of Stirling, mere months before the cloth that was recently recovered in England; the dated stitchings reveal the messages of support were signed by Stirling residents in November of 1916.

The musuem's cloth had hand-stitched messages, such as ''Kia Ora'' and ''Hurrah for the Union Jack, we will cheer our boys when they come back''.

The messages were stitched by families in Kaitangata, Balclutha and Stirling who still have a presence in South Otago.

• The South Otago Museum's World War 1 centenary exhibition ''Never a Week Goes By'' opens at The Creative Arts Centre in Balclutha on March 9.