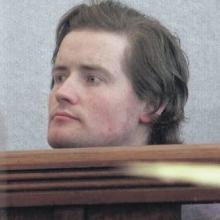 Ben Dempsey was assessed as an above-average risk of committing more sex crimes. PHOTO: ROB KIDD
A Waimate man who flashed some children then took police on a high-speed chase before aiming a rifle at them has been released from prison.

Ben James Dempsey (31) was behind bars for four and a-half years, a sentence he had to serve without chance of parole because he is on a second strike.

He was released to a Christchurch address last month subject to 18 restrictive conditions, a report released by the Parole Board showed.

On October 2, 2017, Dempsey’s parole had just ended, following a period of incarceration for exposing himself to young girls.

The defendant was riding his bike at a Waimate park when he saw four children, some as young as 6, to whom he exposed his genitals and tried to entice them to a toilet block.

When Dempsey was quizzed on his actions at home, he took a .22 rifle and 133 rounds of ammunition from a safe and drove off in a BMW.

He installed new number plates on the vehicle and stole $237 of fuel from a Palmerston service station.

When police began to tail him in Milton he grabbed the firearm from the back and loaded it.

Entering Balclutha, police activated lights and sirens while laying road spikes, but Dempsey swerved on to the wrong side of the road to avoid them.

At speeds reaching 140kmh, he eventually lost control and crashed into a ditch in Barnego Rd.

When an officer pulled up 50m from the scene, Dempsey walked towards him, pointed the weapon and pulled the trigger.

It failed to discharge and the officer reversed at speed.

The officer of 23 years later said the incident was so traumatic he had considered changing career.

Dempsey completed specialist sex-offender treatment while in prison in 2012 and had done the course again during this stint, the Parole Board heard.

Despite that, his progress was described as “somewhat limited” since at times he denied the sexual motivation behind his indecencies.

He was assessed as posing an above-average risk of sexual reoffending.

“We think the estimated risk is . . . if anything, understated,” panel convener Annabel Markham said.

Dempsey’s behaviour in Rolleston Prison, though, had been “excellent”.

“He has worked hard on developing empathy towards his victims and others affected by his offending.”

Dempsey had been keeping a daily mood diary to chart his emotions, something the board encouraged. While out of prison, he spent a lot of time on the computer, his father said.

“He denied that pornography use has been an issue for him but in light of his history we think this is something probation needs to keep an eye on,” Ms Markham said.

- To live at a Christchurch address approved by Probation.
- To comply with electronic monitoring.
- To abide by a 10pm-6am curfew.
- Not to loiter near any school, park, library, swimming pool, recreational facility or church.
- To attend any treatment as directed.
-To attend any mental health appointments and take prescribed medication.
- Not to associate with anyone under 16.
- Not to contact victims of offending.
- To provide details of any intimate relationship to Probation.
- To obtain permission for any changes in employment.
- Not to possess firearms or imitation firearms.
- To provide any internet-capable device to Probation if requested.