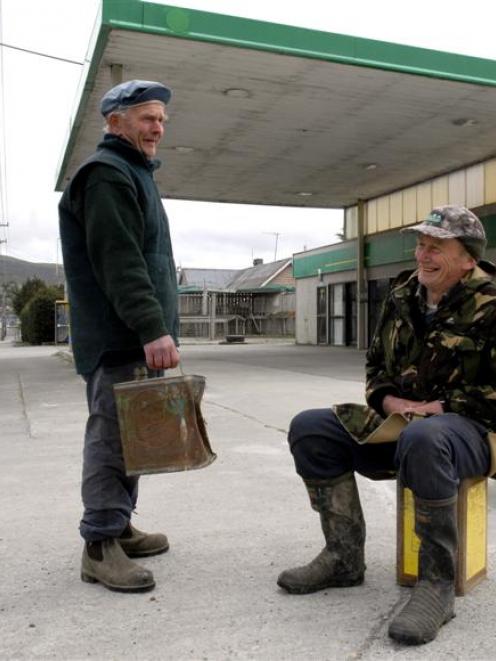 Clinton brothers Ron Blair (73, left) and John Blair (in his 60s) are thrilled the community has joined forces to buy back the town's former service station so fuel supplies can be resumed there later this year. Photo by Gregor Richardson.
The Clinton community, unhappy at losing its sole service station earlier this year, has rallied together to pump more than $150,000 of their own money into reviving the business.

Petrol and diesel will be back on sale at the former BP station within two months, while the shop is expected to reopen early next year.

The turnaround from deserted petrol station in the middle of town, to a new community-owned venture has taken just a few weeks.

But locals were even quicker to come up with the cash, digging deep and coming up with the money in one 24-hour period earlier this month.

Their support means new underground fuel tanks can be installed and the site cleaned up.

A new community group, the Clinton Community Company Ltd, made up of five local directors, will administer the business.

Clutha District Council Clinton ward councillor John Cochrane, who helped engineer the community effort, said locals had been telling him constantly they were dismayed the doors to the former BP station closed, with little notice, in July.

The former owners could not afford to pay for the installation of new underground fuel tanks, prompting the company to be placed into voluntary receivership.

The doors closed with the loss of five jobs, leaving Clinton residents with a journey of least 30km to get fuel.

After receivers staged an auction to dispose of various goods from the building, Mr Cochrane shoulder-tapped several of his trusted advisers and friends to canvass the idea of the community owning the business.

The positive feedback prompted him to call a closed meeting, which generated the offers of cash needed to take the idea further.

Mr Cochrane said the first stage was to pay for new underground tanks.

He hoped fuel would be available by the end of November.

The second stage was to make some cosmetic improvements inside the former shop and lease it to a local operator.

"We could have waited for our knight in shining armour to come to our rescue, but that was not going to happen, so we had to do it ourselves."