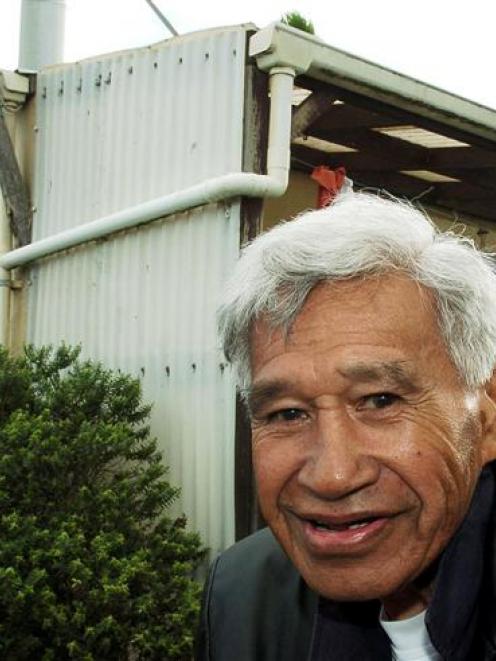 Hone Tuwhare outside his the Kaka Point home in 2004. Photo by Stephen Jaquiery.
Last week, the family of Otago poet Hone Tuwhare was worried about how they would find the money to make sure their father's house would not be lost to the art and writing community.

This week, the family's dream to turn Tuwhare's Kaka Point house into a retreat for artists and writers in residence became a reality with the establishment of a new trust.

The name of the trust is still to be ratified, but it was officially formed yesterday by Tuwhare's son Rob, mooter for its establishment Janet Hepi, former neighbour and Tuwhare supporter Glenys Woods, and long-time friend and artist Ron Esplin who will be acting chairman of the trust until one can be democratically elected.

Mr Esplin said the trust's first task was to map out short and long-term paths towards making the family's wishes a reality.

"The first step is to purchase the property. We'll begin putting applications through for grants funding over the next couple of weeks.

"Using the crystal ball, we would want to have bought the house by the end of the year, but it may be sooner than that."

Mr Esplin said he had had some expressions of interest from potential benefactors across New Zealand in providing funding to buy the house.

"Hone's art is admired by people all over the country and there are many out there who want to see the house preserved and retained as a museum that would perpetuate Hone's contribution to the written art in New Zealand.

"Ultimately, the idea would be to have a residency there to support emerging creative writers," he said.

Rob Tuwhare said if the $160,000 asking price for the property could not be found, the family would be forced to sell it to pay the mortgage on the property which was now due.

He was delighted old friends and members of the community had responded so positively to his bid to set up a trust.

"It's absolutely fantastic. We have been worried for the last six months about where the house would go. It was slipping away and we were thinking it would have to go on the open market.

Mr Esplin said there was still room for at least two more trustees and several people were still considering their options as to whether they would join the trust.