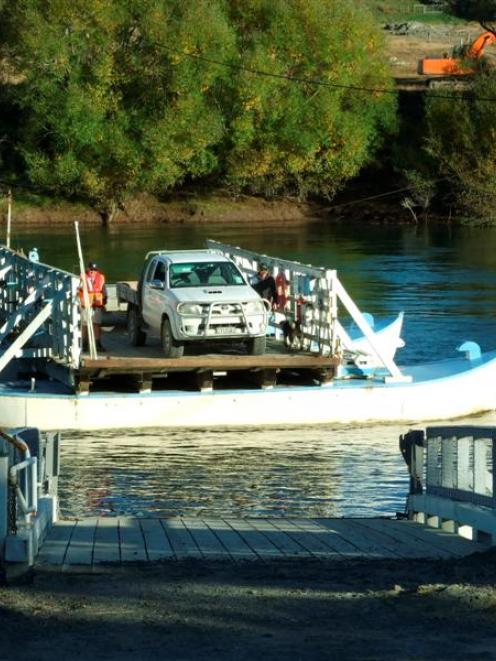 It operates between 8am and 10am, and 4pm and 6pm daily - including over Easter.

The ferry, also called the Tuapeka Mouth Punt, is funded by the Clutha District Council under its road maintenance contracts and is treated much like a bridge. Use of the ferry is free.

Council district assets manager Jules Witt said operation of the ferry was initially suspended on January 10 because of flooding and high flows on the Clutha River.

It was later suspended further as a result of damage to the ramp anchor point on the Tuapeka Mouth side.

Planned maintenance and repairs to the ferry were prioritised under the council's bridge repairs contract for the 2012-13 year, which was awarded to SouthRoads Ltd, he said.

Work to the ferry included replacing the timber deck and handrails, replacing steel beams on one ramp and construction of a new anchor.

Permanent safety railings and netting have yet to be installed on the pontoon ramp.

The exact cost of the repairs is not yet known.

Yesterday an Otago Daily Times car was the first vehicle to use the punt after its return to use, followed shortly by farmer Gary Stirling, whose home farm is at Rongahere but who owns another at Tuapeka Mouth.

He said the journey between farms was 31km by road, but only 11km using the punt.

The Tuapeka Mouth Ferry is about 30km northwest of Balclutha and the New Zealand Transport Agency funds 60% of its costs.

It is believed to be the last water-driven public punt in the southern hemisphere. It is used mainly as a tourist attraction, but some locals still use it on a regular basis.

Permitted loads are dependent on river conditions and are at the discretion of the operator on site.

Due to low river levels, camper vans are not permitted, but smaller vehicles and pedestrians are welcome.