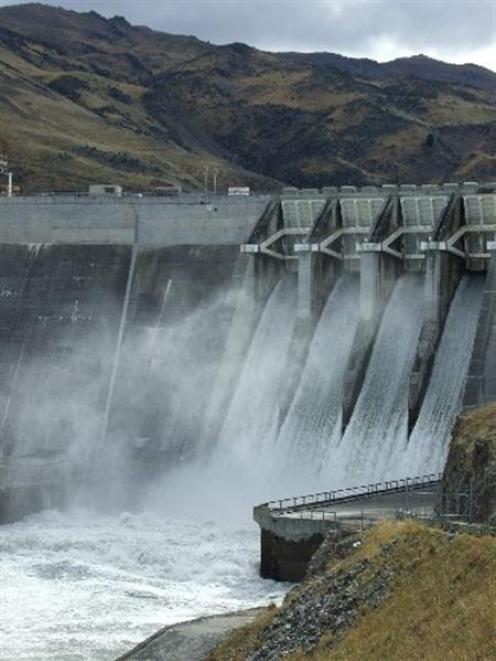 All four spillways open at the Clyde dam yesterday. Photo by Lynda Van Kempen.
Contact Energy generation manager Graham Quinn said although flows were "reasonably high", they were nowhere near the flood levels of 1994, 1995 and 1999.

"We're less than a third of those levels," he said.

"We probably don't need all four spillways open at Clyde, but it gives us an even flow."

The mean flow of the Clutha at Clyde is 490cumecs and the river was flowing at 1068cumecs at 3pm yesterday.

"We'll be keeping a close eye on those [weather] fronts forecast in the next few days and are very much in a `wait and see' mode at this stage, to see how much more rain there is upstream," he said.

The dams could cope with a much greater flow than at present, but it was relatively unusual to have to spill water in late autumn.

One of the positive spin-offs from the increased flow was that flushing of sediment from Lake Roxburgh could occur.

Contact had dropped the level of Lake Roxburgh by 6m on Monday and flushing had been carried out since then.

Lowering the level of the lake speeds up the velocity of the water passing over it and as it moves, it scours out the sediment and moves it downstream.

As part of its consents issued in 2005 to continue operating the Roxburgh and Clyde hydro dams, Contact was required to reduce the volume of sediment in Lake Roxburgh and in the Manuherikia River, to help mitigate the risk of flooding during high flows.

The optimum time to flush sediment was when the river flow was about 1100cumecs, so it was " a bit marginal now" but still worth doing, Mr Quinn said.

Otago Regional Council environmental information and science director John Threlfall said Lakes Wakatipu and Wanaka were "pumping up the Clutha" but there was no concern about the level of the Manuherikia river.

The Clutha River at Balclutha was flowing at 1083.7cumecs at 5.30pm yesterday, which is down on Tuesdays level of 1141.6cumecs.

Clutha District Council Civil Defence officer Selwyn Vigers said river levels on the Clutha were being monitored, and he did not believe there was anything to worry about.

Mr Vigers said he was aware about 1100cumecs was being passed through Roxburgh dam.

"When you add that to the Pomahaka, that's what we're getting - about 1200cumecs down here [in Balclutha]," he said.

"We are monitoring it through the day ... and at the moment, there is not a lot going on."

The Department of Conservation has lifted the high alert warning issued during the weekend in relation to the Young Valley landslip dam.