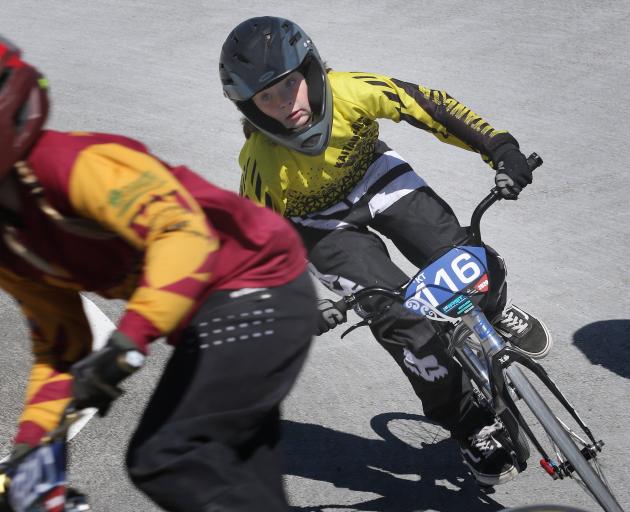 Aida Begg (10), of the Kaitangata Black Gold BMX Club, holds her line as she races at the New Zealand National BMX Championships in Christchurch at the weekend. PHOTO: JOHN COSGROVE
She may be only 10, but she has just become a wheely big deal in her little South Otago town.

Fearless youngster Aida Begg brought home the Kaitangata Black Gold BMX Club’s first national ranking at the weekend — an achievement made all the more remarkable given the club has been tilting at the top level for only two years.

Aida was competing alongside seven other club members at the New Zealand National BMX Championships in Christchurch over the long weekend.

Team manager Marty Hurring said everything came down to her final qualifying race on Sunday morning.

"Aida had to finish in the top three of her qualifying heat to make the final.

"She had to beat two girls from Southland — and she did, racing to a solid third place and putting her in the final."

He said club supporters who had travelled to Christchurch for the event were hoarse with cheering.

"The standard of racing at the nationals is at a-whole-nother level of fitness and competition.

"There were over 500 riders there, every rider focused on getting one of the prestigious national number plates and, to do that, you have to make the finals."

He said that when Aida lined up in the final on Sunday afternoon, it was already 29degC and the infamous Canterbury nor’wester was blowing hard.

"It was stifling for the kids racing — the ambulances were busy not only coping with the intensity of racing but also with riders succumbing to the heat — but Aida managed an eighth place in her last race of the event, and in doing so became the first Kaitangata rider ever to achieve this.

"We are all so proud of her, as she now holds the New Zealand number plate #8 for her age group."

This meant the young rider could display the number plate in all competitions until the next New Zealand championships, at Easter 2021 in Rotorua.

"It was an amazing team effort for Kai, as our small club has only been competing on the big stage for two years.