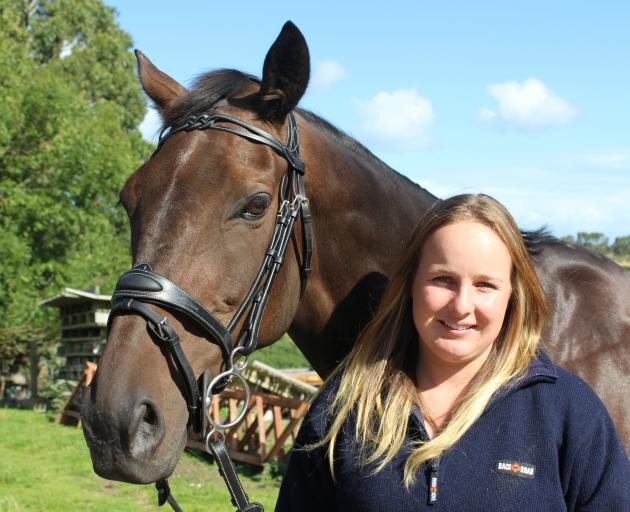 Kimberleigh McCabe and Kace reflect on their journey to Horse of the Year at their Gorge Road home recently. Photo: Nicole Sharp

The underdogs of the show jumping world, Kace and owner Kimberleigh McCabe, of Gorge Road, Mataura, have had quite a journey in the past six years

A 15.2 hands off-the-track thoroughbred who was spending his days in a paddock in Waipukurau, Kace was discovered by Kimberleigh’s mother, Fiona, online in what she describes as the ‘‘bargain bin.’’

Watching a video of Kace online, Kimberleigh decided he was her next horse, and Kace was sent down south to Gorge Road.

‘‘No-one in the North Island wanted him,’’ she said.

That was 2011 and now Kace is jumping his own height and some, competing with Miss McCabe regularly in the 1.40-1.60m classes at shows nationwide — and winning.

‘‘He’s one of the only off-thetracks competing at that height.’’

When Miss McCabe first brought Kace she had no expectations of how high he would jump or how far he would go.

‘‘He was bred in Hawera in Taranaki. I had no expectations. It was more of a miracle than anything.

‘‘He was pretty much just sitting in the paddock.’’

Although she had been riding since she was 2, along with sister Teegan, she had not competed in any major competitions, Miss McCabe said.

‘‘We did a lot of pony club, Springston Trophy and did a bit of show jumping, but nothing too serious,’’ she said.

The first season they competed, in 2011-12, they jumped 1m and did some open eventing.

Kace soon grew sick of dressage side of things so they shifted their view to show jumping the following season, and gradually the pair began working up the heights, Miss McCabe said.

After a successful 2013-14 season, the pair made their first trip to nationals, where they competed in the 1.10m class and came seventh.

‘‘That was the first really big outing. I’d never been to nationals prior to that. I wanted to do it but I didn’t think I was going to be able to do it with him.’’

This season they made the jump to Grand Prix (1.40-1.50m), and competed in their first competition in Waimate last year, where they finished third.

They then went to Nationals, where they finished third in the Grand Prix class.

A lot of hard work went into their training, which involved riding five times per week, with training starting in July before the first competition in September.

The end goal was Horse of the Year in March and a top 10 finish, Miss McCabe said.

‘‘Last season I got twelfth in the Lady Rider of the Year.’’

This year she would be riding in the lady rider class again, as well as the 1.45m Premier Stakes Grand Prix section.

‘‘There aren’t many people who go out and jump this height. You need to have guts and determination to jump that height,’’ she said.

But the biggest challenge of all was not the height the pair were jumping, but the mental game Miss McCabe faced with herself.

Kace had the right attitude to succeed and was not a fan of knocking rails, Miss McCabe said.

‘‘If he’s not at the front getting ribbons he’ll jump around. He’s like a teenager.’’

Miss McCabe said she was lucky to have the support of her employer, Flintoff Chartered Accountants, who let her have regular time off to compete.

She also had another off-thetrack thoroughbred, Panda, whom she bought two years ago and was show jumping at 1.10m.

‘‘It’s definitely a hobby because I have to work full time to support it. I have also just recently had Agrissentials on board as a sponsor, which has been great.’’

For now the underdog’s were continuing to train hard, with their minds focused on Horse of the Year.