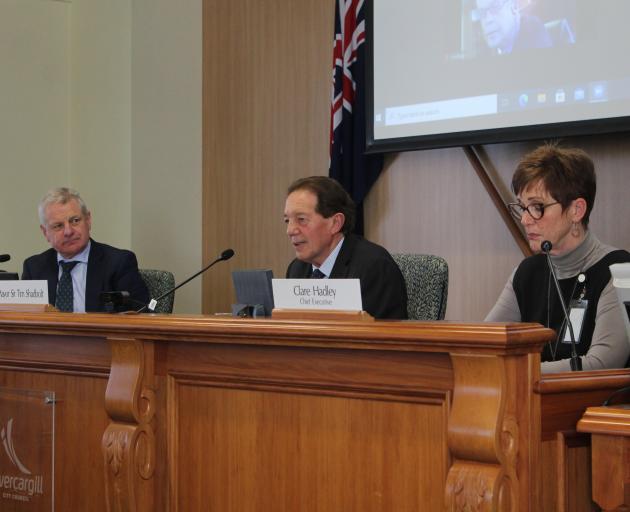 While some councillors remained tight-lipped about the discussions last night, citing the fact they were held in a public-excluded session, others said they left feeling positive.

The meeting followed last week’s revelation that Anita Balakrishnan had written to Mayor Sir Tim Shadbolt and chief executive Clare Hadley on behalf of the department raising concerns about "significant conflict [identified] among elected representatives and the chief executive at Invercargill City Council".

"I’m pretty sure we’ll tick all the boxes and we’ll be back to normal very shortly."

The public had to be excluded to allow for a frank discussion.

"We were talking about people, about people’s attitudes, people’s personality; we did the whole 10 yards," he said.

"At times we were critical of each other, of other individuals, and critical of ourselves. It was a tough meeting, but I believe we’ll achieve a hell of a lot from it."

Fellow councillor Nobby Clark said the department’s intervention had been a catalyst to resolve some issues.

"We had some frank and open discussions with our colleagues. I guess that was a little bit painful at times, but it’s put on the table the things we need to work on and resolve, so I’m quite positive that we’ll get there," he said.

"I think there’s a will across most councillors to get on and resolve our differences."

He could not talk about the process from now on, as they had agreed Sir Tim and Mrs Hadley would take the lead on that issue.

Crs Nigel Skelt and Lindsay Abbott said it would be inappropriate to comment on the meeting.

After the meeting started, Sir Tim asked councillors to receive the report as a late item but Deputy Mayor Toni Biddle voted against it, saying it was not appropriate to discuss a report she had not "had a chance" to read.

Cr Abbot agreed and said he had not had time to read the report either.

Mrs Hadley said she was able to upload it to her computer "about 10 minutes ago".

be noted and said a 10-minute window was unacceptable.

Councillors voted to receive the report, with the exception of Cr Biddle.

Mrs Hadley, Sir Tim and several councillors could not be reached for comment last night.

'Common cold' could be behind symptoms among Stewart Island residents