By Abbey Palmer
0 Comments
With more than 400 train rides in the first hour and a-half, Invercargill’s Great Little Train Show has hit a record in its 36th year.

Show co-ordinator Wendy Metcalfe said she was “overwhelmed” by the success of the event, which took place at the Southland Model Engineers Club — the show’s host — at Surrey Park at the weekend.

“So many people have just come out to support us and we’re very humbled and grateful.”

The two-day event attracted hundreds of families, who got the chance to ride the outdoor train, watch the boat races and sneak a peek at a vast range of model layouts.

Dubbed the "Covid-19 Special", this year’s event still had all the exciting parts which have made it what it is today — just on a slightly smaller scale. 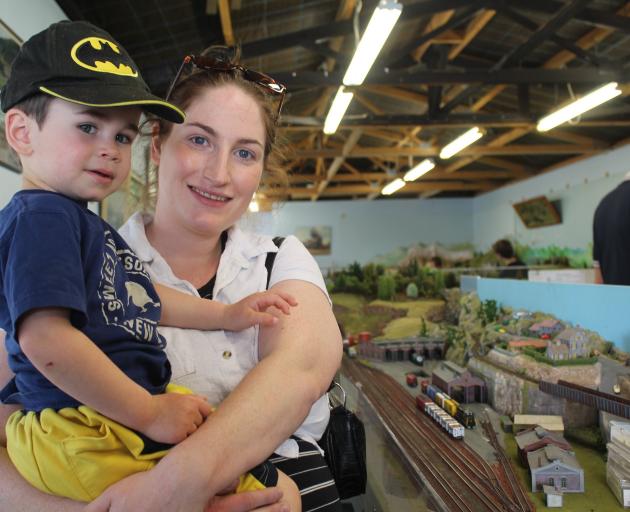 Gore residents Michaela Goodman and Arthur Prattley (2) check out model layouts at the 36th annual Great Little Train Show on Saturday, held at Surrey Park. PHOTO: ABBEY PALMER
Mrs Metcalfe said she had heard from a lot of families about how pleased they were the event was free.

“We’re so glad we did that this year because that way everyone can come along.”

For more than 30 years, the show had been embraced by the community with open arms.

After having to downsize the event from its usual layout due to the financial impact of Covid-19, which normally would include Badminton Hall, club members were taken aback by the level of support from the community.

Due to the success of this year’s event, it would allow for a “bigger and even better event” next year.

“There’s something for everyone at the show, Mrs Metcalfe said.

With about 70 members, the club was made up of a diverse group, and all were welcome to join, she said.

Members were on site on Tuesday and Sunday mornings as well as Wednesday evenings from 7pm for anyone interested in seeing what the club was all about.