‘Weekend widows’ welcome as their partners duck off

By Luisa Girao
1 Comment
The popular idiom states when the cat’s away, the mice will play — but in this case it should be when the ducks are out, the women will play.

Hundreds of Southland women will became "weekend widows" as duck-shooting season officially opens this morning, and two Southland dance instructors have decided to make the most of it.

Morina Colyer and Saniya Thompson from South Pole Dance thought the day was a good opportunity to promote a "taster" class where attendees could try pole and chair dance, aerial hoops and silk.

Mrs Colyer and Mrs Thompson said their husbands did not take part in duck-shooting. 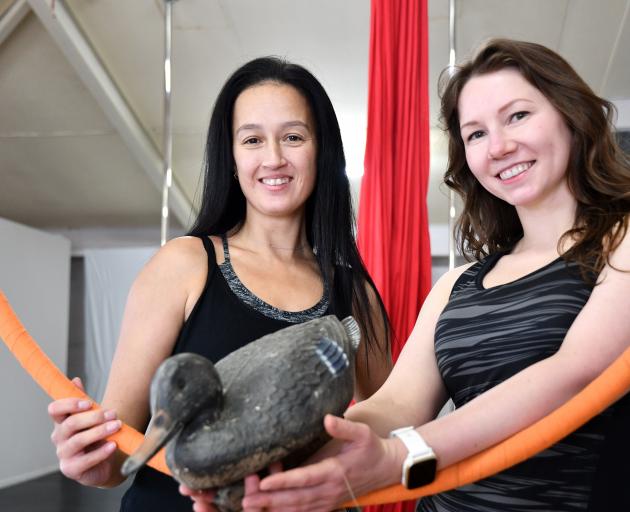 Morina Colyer and Saniya Thompson from South Pole Dance are promoting an event for duck-shooters’ ‘‘widows’’ to encourage they to do something new this weekend. PHOTO: LAURA SMITH
However, the idea came after both had been invited to do aerials in a "duck widow" event in Gore a couple years ago.

"They had these ladies who had their husbands away duck-shooting and they just wanted to have fun and do something very girly," Mrs Thompson said.

Mrs Colyer said events of this kind had been happening in Southland for quite some time, but they wanted to offer something different.

"Usually the mai mai is male only and it is their bonding time ... So we just figured why not spend some time with like-minded women and try something fun," Mrs Colyer said.

During 90 minutes, the instructors will introduce to the group the basics of each modality.

Despite being an event targeted at "widows", they said everyone was welcome.

"If any males want to jump on board and skip the duck-shooting, come in!" Mrs Thompson said.

No dont, men. It's Samhain.