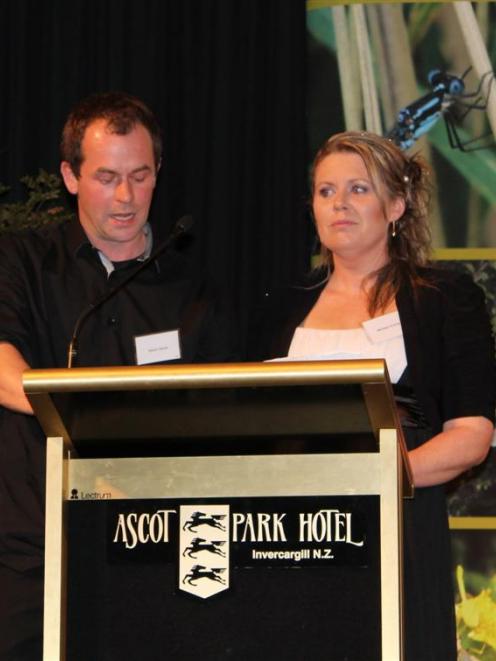 Instead, there was a minute's silence as the 300 people attending paid tribute to the 24-year-old, killed on Monday when his vehicle left the road and hit a power pole north of Winton, about 3am.

Mr Zeestraten, of Centre Bush, was a former Christ's College student and studied at Lincoln University.

He was operations manager for the family business Southern Centre Dairies, which milks about 2500 cows, and was also soon to be a father with partner Gemma Nicholson.

Southern Centre Dairies Ltd is one of the first dairy operations in the country to introduce large-scale free-stall barns to house cows in winter or when paddocks are too muddy.

Effluent from the barn floors goes to holding ponds and is not applied to paddocks until ground conditions are optimal.

The company won the farming category of the Environment Southland-sponsored awards.

In it, the family said the award was a tribute to Stefan's vision and passion for the environment.

''This vision captures potential growth and opportunity, profitability and sustainability in New Zealand farming which improving the environment challenges we face going forward ...

"Stefan was not only committed to creating excellence for Southern Centre Dairies but was generous with his time and sharing his great knowledge with others in the industry.

''We believe it is time to stop seeing free-stall barns as a system which is a liability. It is not - it is a huge asset. Please, do the maths.

''Thank you everyone for your support during this difficult time.

"The farming community has shown its true colours and we appreciate the love and caringsupport we have received.

''It is hard to believe that Stefan was only 24 years old, as he had achieved so much. We have lost a remarkable young leader.

''Stefan would want this award to be celebrated by everyone tonight, as his work was something that he really believed in.''

Mr Zeestraten's funeral is being held in Winton today.