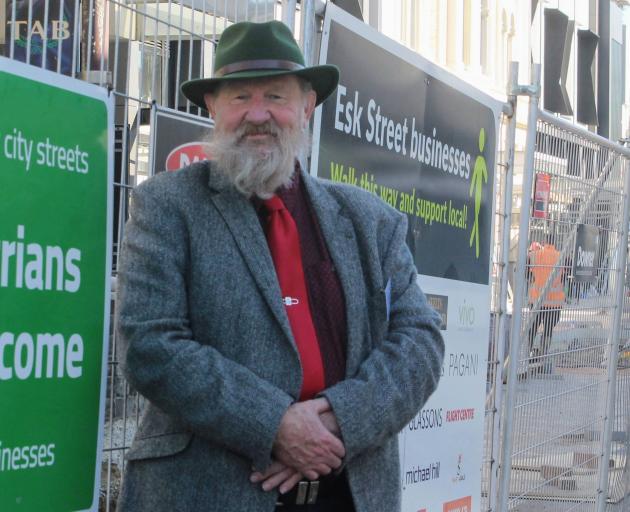 Invercargill mayoral candidate Noel Peterson stands in front of the new CBD development, which aims to bring vibrancy to the region, the same feeling he believes council needs. PHOTO: LUISA GIRAO
Bluff man Noel Peterson will retire his "green wizard" persona for a while at least to enter the mayoralty race in Invercargill.

Yesterday he officially confirmed his intention to run for the top job in the city and also for the council at October’s election.

It will be the first time Mr Peterson (67) has run for the mayoralty in Invercargill after being a Bluff Community Board member in the last term.

He will join the current mayor Sir Tim Shadbolt, the Southland District mayor Gary Tong and councillors Ian Pottinger and Rebecca Amundsen in the mayoralty race for Invercargill.

"I’ve been involved with local government for the last 35 years — mainly from outside, making submissions, being part and attending council meetings.

"I think Invercargill City Council is a great council but that said, it also needs someone that can bring everybody together and I think have the ability to do that."

The only candidate at this stage who was not an elected member at the council, he believed there were pros and cons in being the "outsider".

"I think it gives me actually an extra strength as I have a wider view of how the community feels and thinks. But at the same time, the current mayors and councillors have a distinctive advantage because they have the platform and a lot of resources to get there."

However, he said this would not bother or deter him as he believed there was a need for someone in the mayoral role who had a "broader and fresh" view of the community.

He believed elected members should be eligible for at most two terms at the council to ensure diversity and fresh ideas at local government level.

Known as the "green wizard of Bluff," he decided to put aside this part of himself for now, but his focus on environmental issues would continue.

"There is a new political Noel out and about. I think that is more presentable for the wider community," he said.