When he turned the corner into Queens Dr in Invercargill yesterday, he found it.

"We saw flames coming from what looked like the back of a house and they were spreading to the hedge."

He and his friend Aden Dougherty (11) were playing on their bikes at James Hargest College, when they caught a whiff of a burning smell.

When they arrived at the site of the stench, they were frightened by what they saw.

While the boys did not call emergency services, Southern communications shift manager Andrew Norris said three appliances had been sent to Queens Dr, near the corner of Duke St, about 11am yesterday following reports of fire and smoke billowing from a property.

He described the fire as "heavily involved".

Aden said his initial thought was the smoke was coming from the school and while he was still sad for the home owner, he felt relieved.

"I thought I saw an elderly man coming out of the house, so I felt really bad for him." 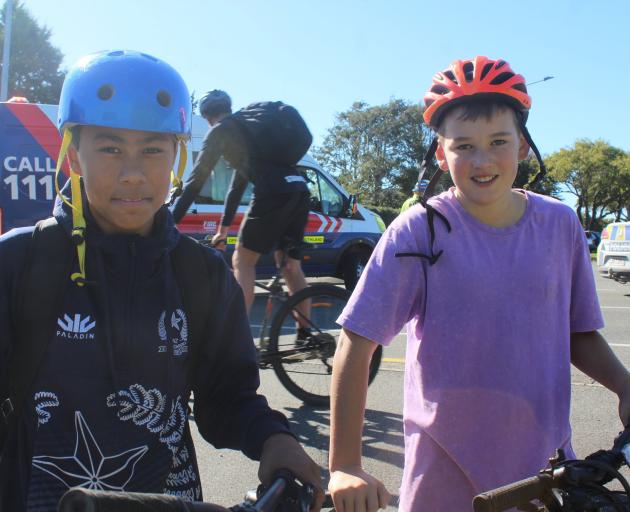 Invercargill youngsters Kye Ripley (left) and Aden Dougherty were riding their bikes at James Hargest College, when they noticed a large plume of smoke.PHOTO: ABBEY PALMER

Next they spotted a woman carrying a cat in her arms from a neighbouring property, which had been "engulfed" in smoke.

Mr Norris said the blaze was under control within about an hour.

However, there was extensive damage to parts of the property and it was unclear how far it had spread.

Nobody was home at the time it caught fire and no injuries had been reported.

Children, families and neighbours stood by watching as emergency services got the fire under control.

Smoke could be seen coming from the roof near the back of the property.

It was not yet clear what had caused the fire.