Weather may hamper the salvage operation of a boat which is spilling oil into Milford Sound after it burned and sank yesterday.

Fire and Emergency New Zealand received a call shortly after 4am about the boat at Fisherman's Wharf in Deepwater Basin following reports of a fire on-board.

Te Anau Volunteer Fire Brigade chief fire officer Graeme "Possum" Moffat said his crew of four firefighters, including himself, were unable to get to the site of the fire initially.

"We couldn’t fly in until 6 o’clock because the weather didn’t permit it." 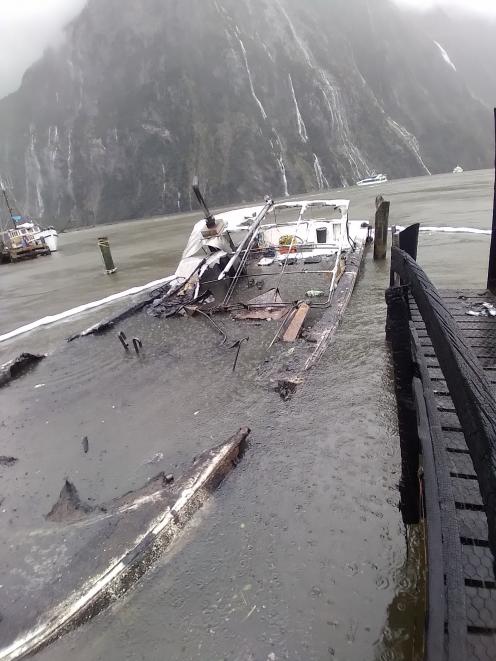 Fire and Emergency New Zealand spokesman Brent Dunn said the Milford Sound Fire Brigade fought the fire during the early hours of the morning, alongside some local fishermen.

"Any crews which would normally respond from Te Anau are unable to get in there, with the road conditions and avalanche risk."

Mr Moffat said when the Te Anau crew arrived, the fire was still burning and it was the only boat left moored to the wharf.

"Obviously there was quite a delay by the time we could actually arrive on scene.

"The Milford emergency response team had tried to put it out but didn’t have breathing apparatus so they didn’t want to get in the smoke, which is fair enough."

While the fire was still raging , the crew were unable to go on board due to the safety risk.

Instead, they stood back and used water hoses from a distance.

The fishing boat was still burning ‘‘quite well'' when firefighters arrived about two hours after it began. PHOTOS: DYLAN O’NEILL

"It pretty much sunk; at the end of the day, that’s what really put it out altogether."

About 2pm yesterday, it was confirmed small amounts of diesel, oil or other contaminants had leaked into the water.

Environmental Southland harbour master and maritime manager Lyndon Cleaver said while there were minimal amounts of oil on board, a boom was put in place to contain the spill.

"We’re lucky there wasn’t a lot of fuel on there. In a lot of ways we’ve dodged a bullet.

"If it had been a fishing boat loaded up with fuel it would be an entirely different scenario."

Firefighters were forced to fight the blaze from the wharf due to the safety risk posed by the engineroom.

He believed a good percentage of fuel would have burned in the fire.

To further minimise the environmental impact, they were now looking to salvage the boat by lifting it out with a crane.

However, the weather could delay the process.

"Unfortunately, Milford Sound is one of those places that either works for you or totally against you.

"On this occasion it’s totally against us."

Once weather conditions improved, local contractors would be brought in, including divers and a crane, to lift the boat out of the water.

Mr Cleaver believed an investigation into what caused the fire would be carried out after the boat was salvaged. However, determining the reason for it would be difficult.

"Good luck trying to figure that out, especially in the condition it’s in at the moment.

"It will be pretty hard to determine, but no doubt the insurers will have a good look at it."