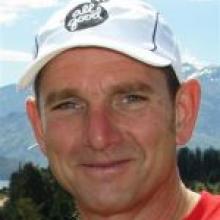 Law (50), of Auckland, took just under 9hrs 30 minutes to complete the 60km Kepler Challenge on Saturday, finishing as planned in the company of his 13-year-old son, Beinn.

The Kepler run was the last mission in Law's second 7in7 Challenge for the Leukaemia and Blood Foundation, and he completed it 40 minutes faster than his 10-hour finale in 2009.

Later this week, Law hopes to learn whether donations have reached $165,000, which would bring the total he has raised for the foundation to $250,000 over two years.

This year's challenge has raised $155,000 and the pool was still rising, Law said when contacted yesterday.

He finished in high spirits and already has another mission on his mind.

"I'm feeling pretty good... It was a wonderful finale as it happened. It was a perfect blue sky day on the Kepler and I ran with a bunch of 12 7in7ers, all running together.

"There was a wonderful spirit between us. Lots of banter went round. A couple of friends from overseas were here to do the Kepler with us and were blown away by the scenery.

"Personally, I felt way better on the run that I expected to. I kept expecting to hit the wall at some point but never got terribly desperate at any stage. We made it to Rainbow Reach quicker than I had expected. We picked up Beinn there, which was pretty special . . . Beinn did it [the last 10km] really easy. It was like a breeze for him. He hardly broke into a sweat."

Law admitted his competitive streak kicked in at Iris Burn when he realised he was tracking to break 10 hours.

The 7in7 Challenge started at Lake Hawea last Sunday and covered seven back-country and alpine routes around Queenstown, Wanaka and Te Anau.

Finishing the 7in7 Challenge was a "nice sign-off in the meantime" but Law is planning to run an ultramarathon (100km) at Tararua in March.

He is doing this to beat the blues.

"Post-event depression is a very real thing. One of the secrets is to already have the next goal in place," he said.