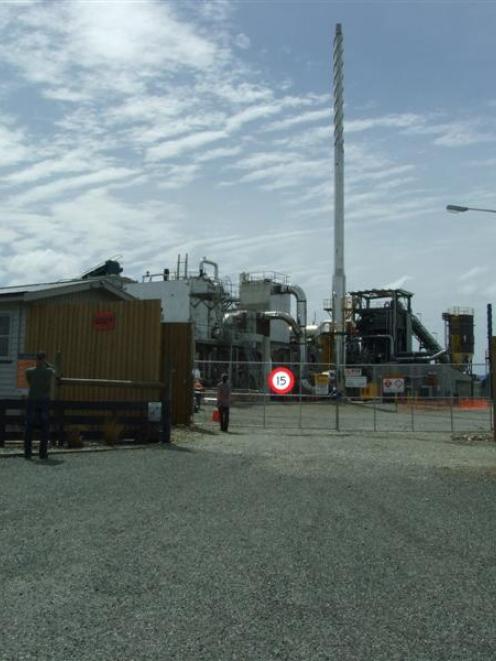 Solid Energy's demonstration briquette plant on Craig Rd, south of Mataura. Photo by Helena de Reus.
All that remains after the mothballing of Solid Energy's contentious $29 million Mataura lignite plant is a divided community and tenant farmers, says the environmental group which fought the state-owned enterprise's plans during the past two years.

Coal Action Network Aotearoa spokeswoman Rosemary Penwarden said the group was confident the final decision on the plant, due later this month, would see it shut for good.

''This is the final nail hammered into the coffin of Solid Energy's grandiose plans to turn farmland into an open-cast lignite mine: a multibillion-dollar plan to use some of the world's dirtiest coal to convert into diesel, urea, and into highly experimental briquettes,'' she said.

She noted that from ''promises'' of 85 jobs at the plant when construction began in September 2011, there was now one full-time staff member, employed to oversee its mothballing.

However, Solid Energy's financial crisis overtook the Mataura plant's full commissioning. Research and development continued under a joint venture with GLT Energy, from February when Solid said it was ''exiting non-core'' projects. The joint venture was suspended this week while its viability is assessed.

Ms Penwarden said Solid Energy had left a divided community, sponsorships abandoned, and ''a valley full of tenant farmers'' wondering about their future.

Almost 1000ha of Southland farmland was purchased by Solid Energy, retaining tenant farmers, but the land is now for sale.

''This should be a warning for any community when a big coal company comes to town, promising the earth,'' she said.