By Luisa Girao
0 Comments
Under the Invercargill sky, cranes have been working intensely for the past two years in what has been described as the most transformational project for the city in this generation. Otago Daily Times reporter Luisa Girao had a tour of the site led by Invercargill Central project director Geoff Cotton and developer Scott O’Donnell, and spoke to them about the expectation for the opening of the $165million project.

In the last five years, Invercargill has been experiencing a development boom with hotels, major retailers and other businesses putting down roots.

In the centre of the revamp, the Invercargill Central Ltd development is taking form and shape.

The first part of the project is due to be opened on June 10, and about 200 labourers have been working at full steam in order to make it happen.

Covid-19 lockdowns and some other interruptions, including an injunction to halt the work, put extra pressure on the development.

However, Mr Cotton and Mr O’Donnell are pleased with the progress.

"It’s been done pretty well — the project is tracking along.

"Obviously we had some interruptions . . . but despite that, it is going well and now is the important year — 2022 — because we’ve got to open," Mr Cotton said.

Mr O’Donnell said 85% of the floor space within the development had been leased.

Anchor tenant Farmers, 250 car parks and about 25% of the stores, including Glassons and Hallenstein Brothers, would be part of the first stage.

A combined store of Max and Barkers, a mega Cotton On store (including Cotton On Kids, Cotton On Body and Rubi Shoes), Merchant 1948, Pagani and Australian surfwear brand Amazon are among the confirmed businesses to open later in the year. 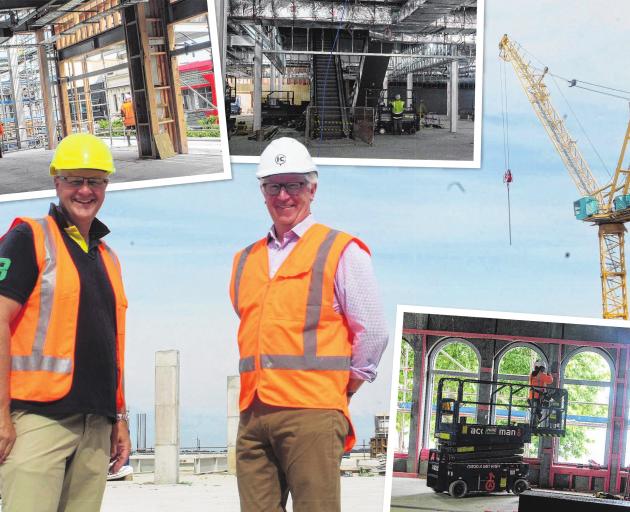 Invercargill Central developer Scott O'Donnell (left) and project director Geoff Cotton at the top floor of the new CBD development which they hope will bring vibrancy to the city centre. Inset are pictures detailing the progress of the $165million project which include retail stores, 675 car parks, office spaces and three different food areas. PHOTOS: LUISA GIRAO
"We have quite a few new brands turning up and that is probably the highlight.

"I know a lot of people in Southland want something new and invigorating so hopefully we are doing our best to bring those down," Mr O’Donnell said.

He labelled his development as an investment which "glues" the town together.

Mr Cotton also said about 29,000 bricks were recycled from the demolition of the site and would be incorporated in the entrance of the mall, along with artefacts found during the excavation which would be placed as part of the interior design of the development.

Scaffolding would be removed and all the facades would be completed by March, he said.

Mr O’Donnell said the project was currently "on budget" of $165million.

Some confusion was drawn last week when Invercargill City Council started to consult about further investment for the development.

It had already invested $46million to support the first three stages of the project, but now the council was proposing to invest a further $7.5million in the development and provide a $22.5million short-term loan for the project in light of a shortage of funding.

The consultation document from the Invercargill City Council stated the project cost had increased to $180million, but Mr O’Donnell denied that.

He said although the project was on budget, due to the uncertainty in both construction and supply chain, the council wanted to have the ability to deal with any "curve balls" to ensure timely completion and early consultation.

The decision to not take a commercial bank loan until the centre had been operating for one year was another reason for this loan as Mr O’Donnell was proposing ICC and HW Richardson Group both put up the short-term loan of $22.75million each in the interim.

The $22.75 million short-term loan would be on commercial terms to be repaid and replaced with a bank loan at the end of 2023, he said.

"It makes commercial sense to eliminate the bank until late 2023, meaning ICL shareholders could remain the first level of security over the entire project."

ICC said this investment would not have an impact on rates.

The council’s consultation process on the proposal will close on February 11.