Entries flowing in for design awards 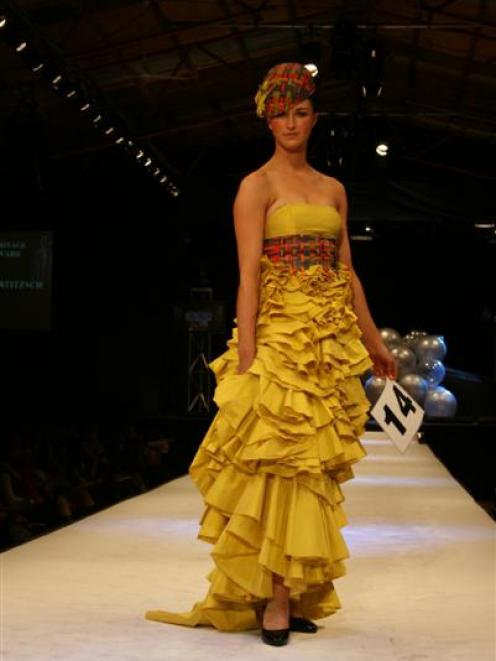 This design by Anna von Hartitzsch, of Wellington, entered in last year’s Hokonui Fashion Design Awards, was inspired by New Zealand kowhai flowers. Garments have started to arrive for this year’s event, to be held next month. Photo from Ensign files.
Organisers anticipate a busy time during the next two weeks as garments start to arrive for the Hokonui Fashion Design Awards.

Auditions for this year's models would be held on July 12, then a full day of fitting garments, awards executive producer Heather Paterson said.

It would be a very busy time for the wardrobe team as they tried to fit the garments to the most suitable model, Mrs Paterson said.

The awards would be held during the weekend of July 24-25 and would include a celebration of the event's 21st birthday, and a brunch with guest speaker Francis Hooper of the World label would be held on Sunday, July 26, she said.

‘‘Our 21st birthday celebration looks to again be a fantastic show of exciting design, spectacular showcases and a celebration of the creative talent around us,'' Mrs Paterson said.

Organisers said the number of entries was pleasing and concerns that the recession would deter designers from entering the awards had not been borne out.

The average number of entries in the past has been about 270, which is narrowed down to 200 finalists.
Entries will be judged and finalists chosen and organised into a choreographed show to prepare for the gala weekend in July.

Judges will include Mr Hooper, Theresa Brady of the Doosh label, designer Charmaine Reveley and Sydney-based designer Rex Turnbull, who has judged the awards on a previous occasion.

Tickets for the show will be on
sale at Cairns Music Ltd in Irk St, Gore, from June 25.

- Dion Woodfield is a Southern Institute of Technology journalism student.