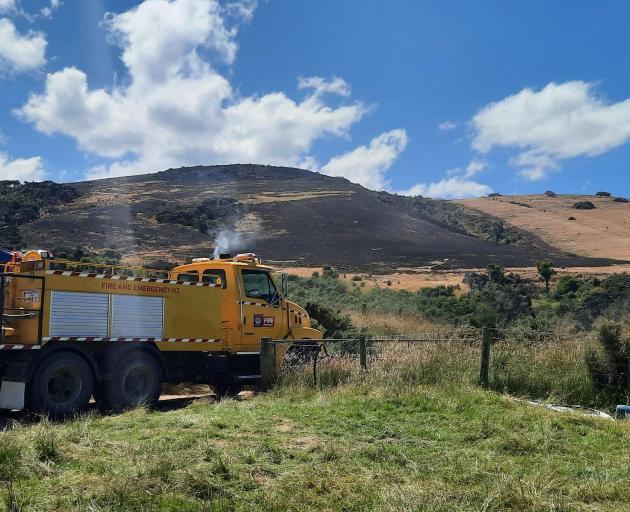 An accidental fire in Southland could have caused major damage if not for the Southland volunteer fire brigades and helicopter crews who spent 24 hours extinguishing the blaze. PHOTO: SUPPLIED
Firefighters did not have access to water when they stopped a grass fire from spreading to a nearby 12,000ha forestry block in Southland.

Fire and Emergency New Zealand (Fenz) was first alerted to the fire at lunchtime on Wednesday.

A few hours later, eight fire appliances from across Southland and three helicopters were tackling the blaze.

Deputy principal rural fire officer David Coveney said he was impressed firefighters had managed to put it out without any water initially.

"They did a really, really good job. I take my hat off to them."

Communications shift manager Alex Norris said volunteer fire brigades from Nightcaps, Mossburn, Drummond, Athol and Blackmount were dispatched in groups throughout the day on Wednesday to assist with the fire on a farm block near Sinclair Ave, about 6km from Nightcaps.

Nightcaps Chief Fire Officer Tony Philpott said crews struggled to get the hose to work on such a sloped terrain so instead, they were forced to use hand tools.

Forestry crews only withdrew from the property about noon yesterday — 24 hours later.

Invercargill fire investigator Murray Milne-Maresca spent the day examining the damage and investigating the cause.

While it was originally thought to be suspicious, he later found it was caused by hot exhaust from a fertiliser truck.

"There’s lots of possibilities, it could have been the exhaust came into contact with the dry grass or it could’ve given off sparks."

One thing was certain — it was very lucky there had only been a slight wind.

"If it wasn’t for the incredibly good work from the Nightcaps crew who were there first, it would’ve been a totally different story."

was driving towards the fire when he realised how major the risk was.

"I was about 15km from it and it did not look good at that range.

"Because it was on a slope, about a 60-degree angle, you could actually see right into it."

Being so close to such a large block of forestry, the outcome could have been "horrendous".

When he arrived, the grass, which was once brown, had turned black.

"It [the fire] sort of made its way up the hill, edging itself through the fence and into the forestry."

He was in a helicopter when he looked below and was in awe of what he saw.

Fire had torn through the entire paddock.

By the time firefighters had got the blaze under control, they were exhausted.

"All the firefighters on the ground realised what the threat was and what could’ve happened so everyone just got on with it and did a really thorough job.

"That’s what I asked of them and that’s what they delivered."

Forestry crews worked through the night checking for hotspots and ensuring there was no chance of another flare-up — one was found and dug out.

The owners of the property were advised to keep an eye out and call 111 if fires reignited.